FOLKLORE ON FRIDAY - The Embrace of the Iron Maiden 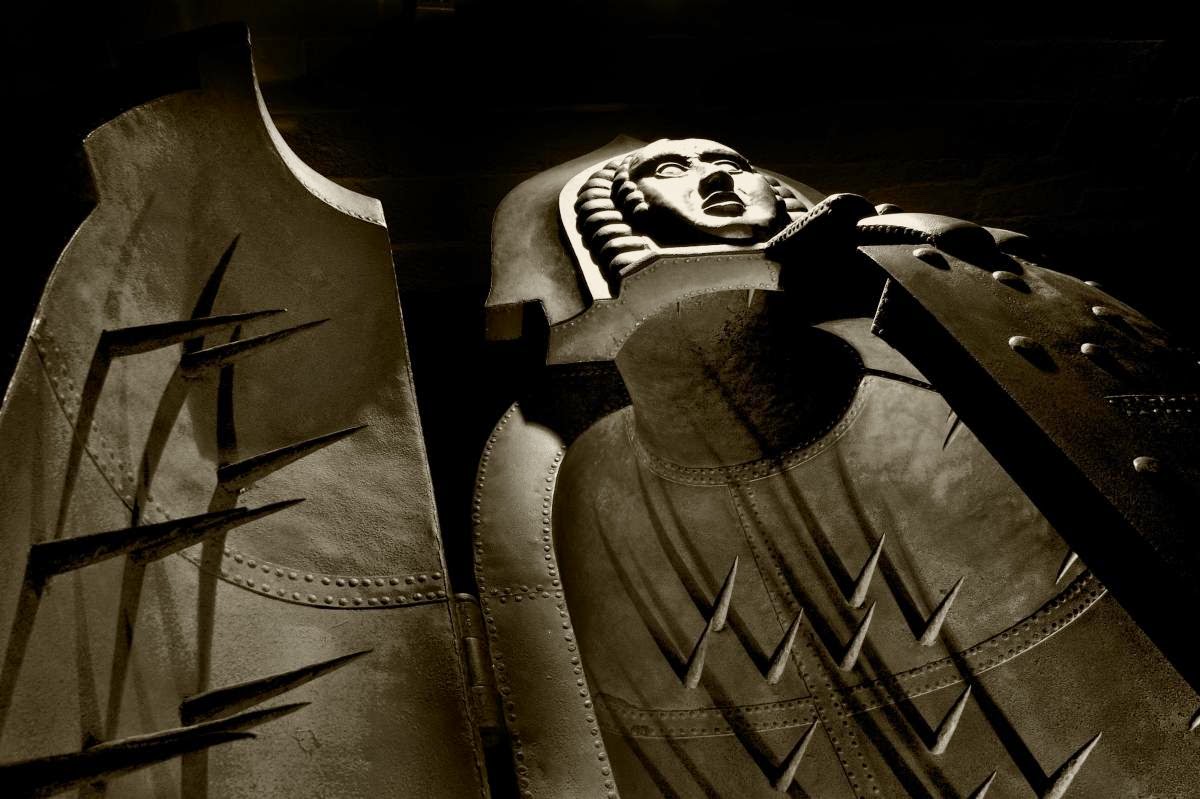 Casket? This was no casket. Caskets do not stand open and upended. Caskets do not bear upon their lids the raised, moulded features of a woman's face.
Caskets were not spiked inside.
Recognition was simultaneous with horror.
This was the Iron Maiden!

From The Skull of the Marquis de Sade by Robert Bloch


And I am quite sure that like Mr Bloch's unfortunate narrator Maitland, most of us would have no problem whatsoever in identifying this most infamous of medieval torture devices. For in the popular imagination no torturers' dungeon would be complete without an iron maiden waiting in a corner alongside the other tools of the trade such as braziers, branding irons and a rack. And aside from being a perennially popular feature in museums, castles, ghost trains and assorted other chambers of horrors, it has also provided the name for one of the biggest heavy metal bands of all time.

Originating in Germany, where it is known as the Eiserne Jungfrau, the Iron Maiden was a hideous device of both torture and execution. Its operation was as cunning as it was cruel, and as I humbly admit I cannot possibly compete with the descriptive powers of horror legend Robert Bloch, I'll let him describe the embrace of the maiden...

The longest spikes would pierce him first as the lid descended. The spikes were set so to enter his wrists and ankles. He would hang there crucified, as the lid continued its inexorable descent. Shorter spikes would next enter his thighs, shoulders and arms. Then, as he struggled, impaled in agony, the lid would press closer until the smallest spikes came close enough to penetrate his eyes, his throat, and - mercifully - his heart and brain.

Horrible eh! Our ancestors were a shockingly brutal bunch weren't they! Well actually, modern historians rather suspect they weren't! For while we have all been horrified - and may I add secretly ghoulishly delighted - with tales of the iron maiden, it is currently thought that this terrible device never really existed. 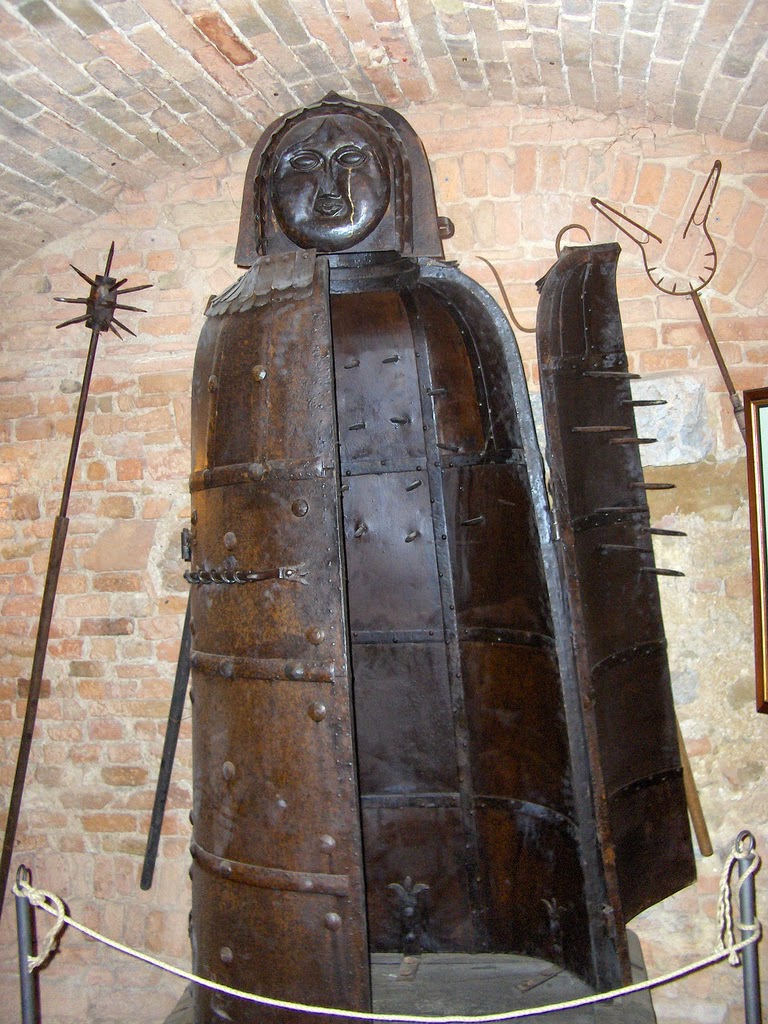 To begin with, once you get past all the gory imaginings of the blood-drenched results of its sadistic operation, and consider the actual design, the dear old maiden starts to look a bit suspect. For would it not be the case that for all those spikes to inflict prolonged pain and suffering and not instant death, wouldn't they have to be adjusted for every individual prisoner? For not every man is the same height and hence to do their evil duties, the spikes would need to be carefully rearranged. Indeed a victim would have to have a pre-torture fitting for the Maiden, to get all the spikes at the right height to pierce the right places.

However the surviving iron maidens in museums and castles are noticeably lacking in any systems for their spikes to be re-positioned and tailored for individual *ahem* clients. Which leaves us with the unlikely possibility that instead iron maidens came with height measurement signs like you see in the theme parks - "Sorry buddy, you have to be THIS tall to die horribly in this torture device!"


But aside from these mechanical impracticalities, the dread iron maiden has other more serious historical problems. And the major one is that there is no mention of it in any historical records. Now a guidebook printed in 1784 tells of "the iron maiden, that abominable work of horror that goes back to the times of Frederick Barbarossa" which can be seen in Nuremberg. Barbarossa was the King of Germany from 1152 and became both the King of Italy and the  Holy Roman Emperor in 1155, and reigned until his death in 1190. However despite having paperwork from three different courts, we find no mention of anyone executed by the Maiden. And the centuries after are equally void of any mention of iron maidens, let alone any details of evidence gained from their uses in torture or as a method of execution.

The earliest, and indeed only, reference to the use of an Eiserne Jungfrau dates from 1515, when a coin forger was executed in an iron maiden on August 14th. Now given that records of executions were best-sellers in the early years of the printing presses, and that legal and court records from the Middle Ages still survive,  it is very curious that this is the only mention.

In fact, it has been thought so curious that now it is widely believed that this reference is in fact a historical hoax. It was discovered by the German philosopher and archaeologist Johann Philipp Siebenkees in 1793, but the original source has never been found. And given the lack of any other records of iron maidens being used, historians have concluded that Siebenkees fabricated it. 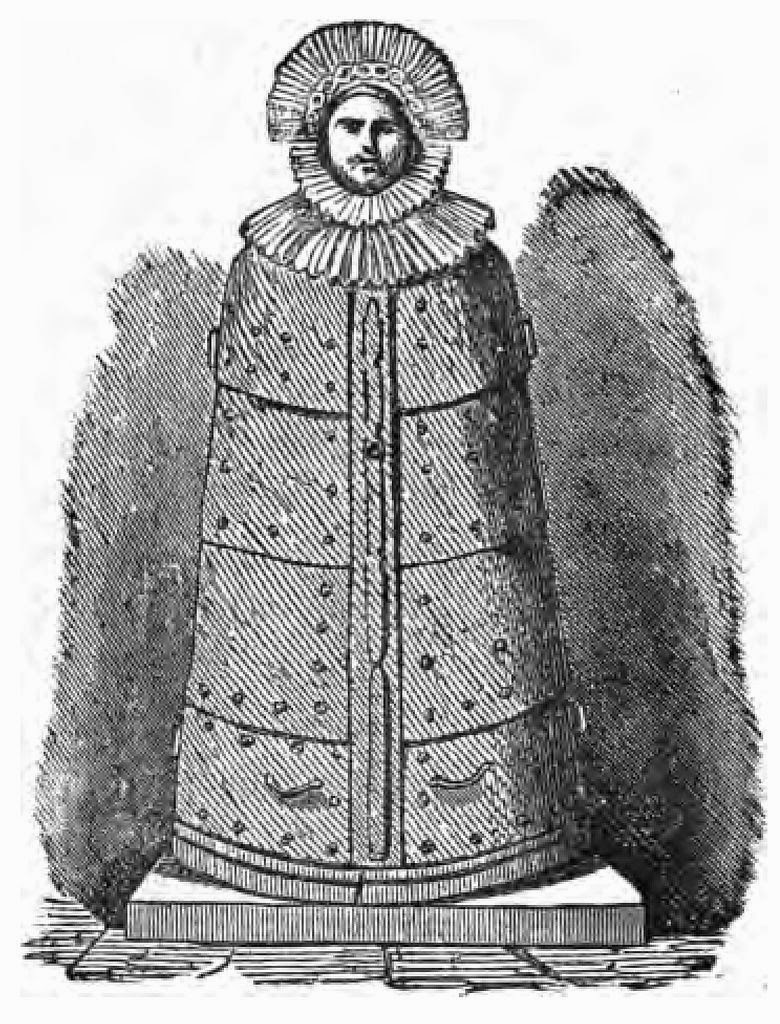 Quite why Siebenkees fabricated this no one is entirely sure. However, as evidenced by its mention in the guidebook quoted above, by the late 1780s, iron maidens were already popular tourist attractions, and their blood spattered alleged history was already well-established. But where does this modern folklore originate from? Well, it is thought that the infamous iron maidens displayed in museums and castles were actually constructed from genuine historical items.

Historians think that these sinister devices were assembled from medieval punishment devices known as 'shame coats'. Appearing in 13th century Germany these Schandmantel were a sort of mobile version of the stocks or pillory, with wrong-doers sentenced to wear these heavy containers or metal and wood so that the populace could mock and taunt them. And the aforementioned medieval court records that are so silent on iron maidens helpfully tell us that a spell in a Schandmantel was usually handed out to those caught indulging in prostitution or poaching.

By why did keepers of castles and museums invent these devices? Well in the mid 18th century saw the birth of gothic fiction with the publication of The Castle of Otranto by Horace Walpole in 1763. Walpole's lurid tale soon spawned a host of imitators, spinning further yarns of European castles filled with depravity and torture. Naturally castles, keeps, and all manner of historic sites and ruins became very fashionable places to visit as the gothic fiction craze boomed. And naturally enterprising caretakers and owners made sure their sites had plenty of lurid history to tell the tourists, and evidently some decided a few props were in order. And hence all manner of alleged medieval torture devices and instruments were being exhibited, and like the infamous maiden many were complete fabrications. 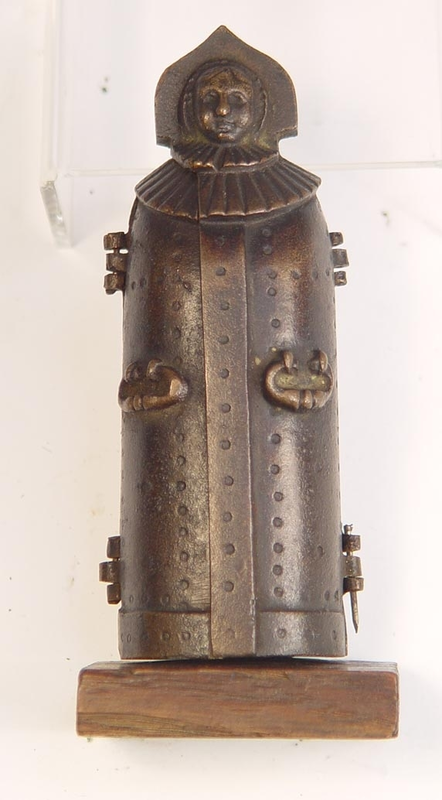 A miniature maiden produced 120 years ago as a tourist souvenir

So finally, where did the inspiration for the spikes come? Well, there are two possible sources. The first comes from 5th century tome City of God by St. Augustine of Hippo. In it he records the torture of Regulus by the Carthaginians, writing that -

They shut him up in a narrow box, in which he was compelled to stand, and in which finely sharpened nails were fixed all round about him, so that he could not lean upon any part of it without intense pain; and so they killed him by depriving him of sleep.

But considering the German origins of the iron maiden, I think it possible there was a source closer to home, and very likely a good deal more familiar - German folk tales. In the stories collected by the Brothers Grimm we have a tale sometime called Falada, but best known as from its appearance  as The Goose Girl. And at the end of this story  -

The false bride said, "She deserves no better fate than to be stripped stark naked, and put in a barrel that is studded inside with sharp nails. Two white horses should be hitched to it, and they should drag her along through one street after another, until she is dead."
"You are the one," said the old king, "and you have pronounced your own sentence. Thus shall it be done to you."

Furthermore in another tale The Three Little Men in the Wood, a wicked stepmother comes to the same bad end -


“The wretch deserves nothing better,” answered the old woman, “than to be taken and put in a barrel stuck full of nails, and rolled down hill into the water.” “Then,” said the King, “thou hast pronounced thine own sentence;” and he ordered such a barrel to be brought, and the old woman to be put into it with her daughter, and then the top was hammered on, and the barrel rolled down hill until it went into the river.

And the same cask and nails fate is meted out yet again to another wicked stepmother in  The White Bride and the Black One. Yes, oddly enough, being placed in a nail studded barrel was something of a common punishment for the wicked in Germanic folk tales! And hence, given its unusual prevalence and the popularity and age of these tales - many of which are thought to date to medieval times - it is perhaps unsurprising that when looking to invent a suitably lurid and eye-catching torture device to impress the devotees of the gothic, these fairy tales heard in childhood were re-imagined as a fake historical punishment.

Indeed the iron maiden has been able to masquerade as history for so long precisely because it appeals to the same ghoulish glee as the hideous punishments in the tales of Brothers' Grimm. And so then, rather than a testament to the bloodthirsty and brutal nature of our ancestors, the iron maiden is actually proof that folk down the ages all love a good gory gothic story! 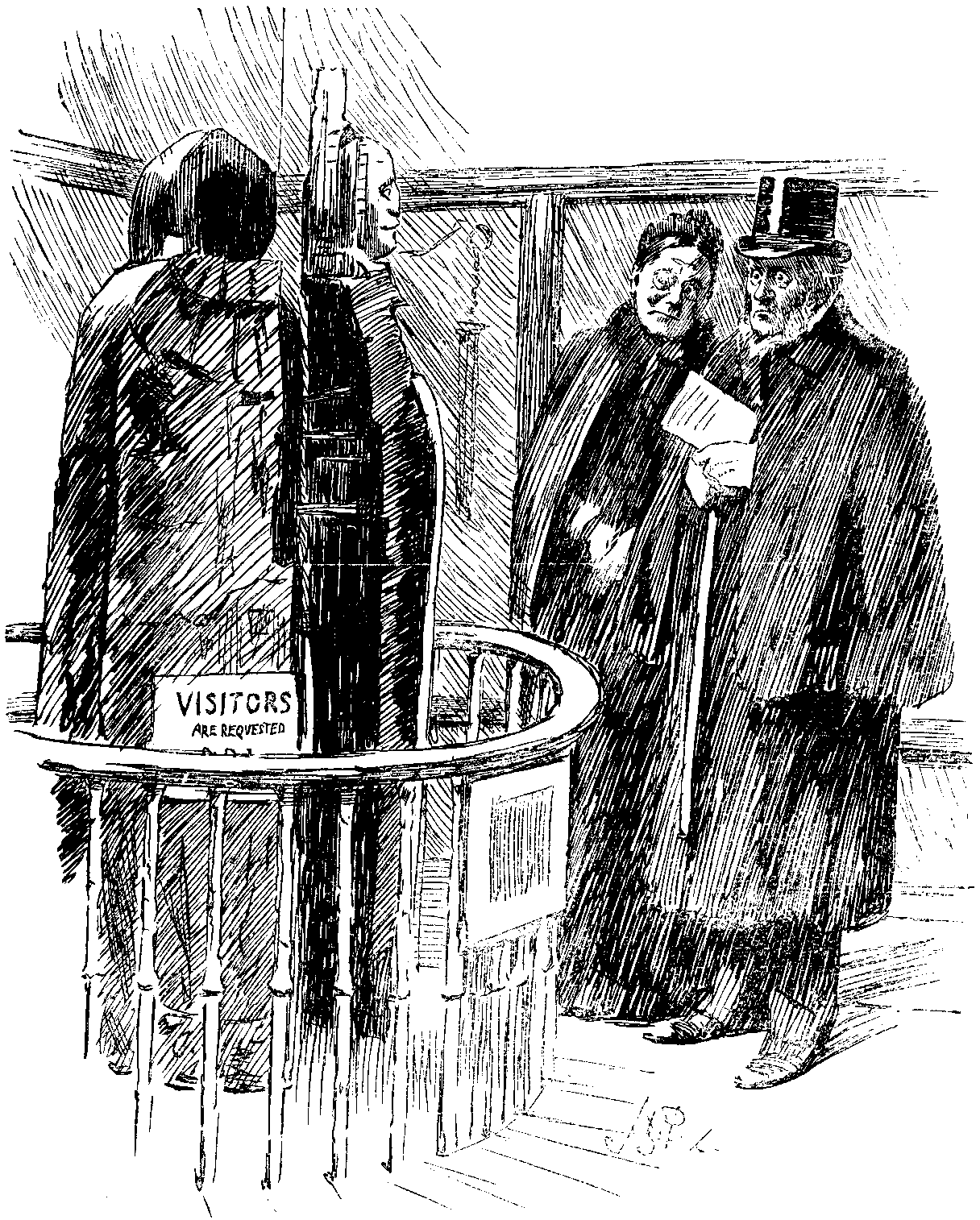