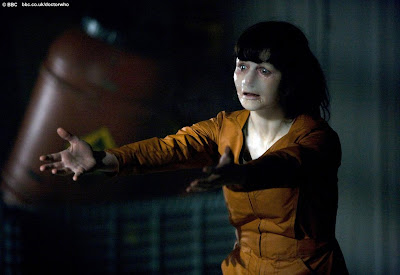 Right then, I didn't really intend to write a review of The Rebel Flesh as it's difficult to pass judgement on just one half of a story. So that was the plan when I sat down to watch this episode and when the credits rolled I thought 'yep, save the reviewing until both parts are in the bag next next'.
But then my brain, being the most unhelpfully helpful organ I possess, and often as erratic as the TARDIS itself, started wheezed and groaning, the central column began to rise and fall, and lo and behold, a string of critical thoughts started to materialize on the page...
Now writer Matthew Graham's previous foray in Doctor Who was Fear Her back in the second series of the resurrected show. Now this episode, although it did not attract the ire of fans like a farting Slitheen, didn't exactly win many hearts either. Fear Her had some interesting ideas, memorable visuals but somehow ended up feeling like less than the sum of its parts. So then I wasn't exactly hotly anticipating this two parter. On the other hand though, since then Graham had delivered two cracking slices of modern genre telly with Life on Mars and Ashes To Ashes, which I'd thoroughly enjoyed, so equally I wasn't dreading his return either.
Now while this wasn't a stellar episode, it was a cut above his previous Who outing. And I don't necessarily think that the fact that this wasn't an all singing, all dancing extravaganza is a bad thing. As I've previously remarked, a frequent pitfall of two parters in new Who is a cracking opener that the second half struggles to match. And The Rebel Flesh doesn't fit this pattern; it slowly builds up its plot to an intriguing cliff-hanger but it has left plenty of room for the story to really kick off in Part Two.
Rather than two episodes making one adventure, this feels more like a first half of a feature length episode. And therefore I can understand why some folks found it a bit too slow moving, but at the same time, judging from how Graham is structuring this story, I'm guessing that he's saving all the real action's for next week's The Almost People.
Naturally, how good The Rebel Flesh actually is will very much depend on what goes down in seven days time. But there are a few things that I did like that can be mentioned without setting of the Spoiler Alarms.
This episode felt very old school, very classic series. For a start, judging from my twitter stream, the Gangers seem to be hitting the right buttons for a Doctor Who monster - you know, those big ones marks "Scary" and "Hide Behind Sofa". And also we have the return of a pair of familiar tropes; firstly this is a tale in the classic 'base under siege' mould, and secondly it features a device much loved in the original series - place the TARDIS somewhere out of bounds to stop any easy escapes right in the bud.
But aside from the creepy monster action and running down industrial corridors old school stylings, this episode also showcased some other classic series virtues, such as character exploration and more motivations for its monsters than the usual just wanting to take over the universe routine. Rather than a very exciting running around 'what's going on!' instalment and then a follow-up of even more dashing about but this time eliciting a deflated' is that it?' response, it would seem that Graham is sticking to the vintage serial storytelling of set up, development, climax spread over two episodes. In short, he's letting the story breathe and grow, sacrificing some fireworks in this opener in order to deliver a better rounded adventure.
Certainly there's a lot of potential in this story line. He's not just set up a decent threat and a frankly fascinating cliff-hanger (and one that could be a very crucial development in the story arc too) but there's also a good old fashioned moral dilemma fused to the plot as well as all the classic scary corridors and super creeps.
So then, here's hoping next week's episode repays my faith! See you back here then for a full and frank discussion!
Posted by Jim Moon at 20:04

I have to say, despite Internet bleatings which seemed to have knives out from the off - one review opened with "I don't know what I thought about this episode" and promptly gave the cg solar tsunami a kickin' as if one 5 second cg particle storm was indicative of the whole episode - I enjoyed this episode. With its mix of Blade Runner "what is human?" introspection mixing with a dash of John Carpenters The Thing remade for tea time audiences.

And not to return to that high horse again, but this was family frights and scares rather than hardcore fan homages to events 40 years before most of the audience were born.

If I had any genuine criticisms it was that the end reveal was so heavily signposted they may as well just had it written in the opening credits and saved everyone the bother of waiting. While my other bugbear was that, much like Curse of the Black Spot this episode felt over familiar, essentially copying the Silurian two parter from last year. From the setting, to the Doctors need to keep one of the enemy alive and reason with them, yet finding himself thwarted by human nature, The Rebel Flesh copied every beat, just at a much more moderate pace.

Again, I didn't dislike this episode - certainly not as much as I wanted to gouge my eyes out at the Doctor saving the Olympics in the risible Fear Her - so for me this was a fine mid season episode cruising though to the key moment in the finale - and if it truly is a double bluff and has no baring on The Impossible Astronaut I'll eat my Fez... Cos Fezes are cool....

Big thanks again for your insightful remarks sir!

This story is very similar to the last series' Silurian circus though I would chalk that up to Graham and Chris Chibnall both drawing from the classics of the original series. However I do suspect that this adventure may turn out to be the better paced of the two - as we got the ST-NG stylee committee meeting over with in the first episode :)

And I must confess that although I did see the cliffhanger reveal coming in one of the early scenes, all the juicy nature of being human stuff distracted me so I did forget and hence the end was a surprise! Not sure if that's score one for this episode or points away for me being fuddle headed...