After months of pestering, my partner in crime Mr Tom Greenslade has finally managed to stay out of the pub long enough to set up his own blog. Or rather tumblelog.

And what in Cliff's name is a tumblelog? Well Tumblr is a blog site where as well as the the usual posting you can easily add links to pictures, web pages, quotes, music or video you find online. It's really fun and a great way to share all the groovy things you stumble upon while traversing the net without having to spam all your mates via email. Go on check it out, you'll like it! Honest!

Anyhow the linkage to Tom's is - http://hypnogoria.tumblr.com/.

He's promising a good deal of what we call 'news of the weird' as well anything that takes his eye. Plus there'll be a fair bit of our own creative efforts that don't fit into the parameters of Hypnogoria.com.


There been some changes at Hypnogoria Towers. As those wonderful folks at Zazzle have opened a UK arm of their operation, we've moved our store there. The all new UK shop can be found at -

Not only does the shop look a lot nicer now, but with Zazzle you can put our designs on a variety of different garments of your choice! Plus shipping to Europe is now cheaper! And Zazzle now accepts Paypal!

Plus if you wander over to the main HYPNOGORIA site there's a new line of designs to check out! 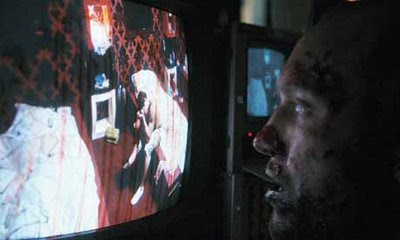 As a follow up to my earlier review of the first two episodes, here's a quick overview on the whole thing ...

I'm happy to report that the high standards of the opening episodes were maintained and the story reached a satisfying conclusion. High marks to creator Charlie Brooker and director Yann Demange for bringing us a full strength piece of horror fiction.

And it's all the more remarkable for being a television production. TV horror all too often suffers from being toned down so not to upset viewers and advertisers, but Dead Set made no compromise to the mores of television. A good example of this is Dead Set's Patrick not only is he throughly unlikeable as a character, he's more foul mouthed and offensive than Day of the Dead's Rhodes and Steel put together, and meets a spectacularly bloody end that I was amazed the TV bosses allowed.

My only niggle with it being a TV production was that it was shown as a mini series. I did feel that some of the tension and momentum was lost bu showing it in episodes. But as I suspected the DVD presents it as a movie, and E4 promptly repeated the whole series in movie format - and really this is the way it should be viewed. And I wouldn't be at all surprised if a canny distributor picks up Dead Set for a cinema release outside the UK.

As is becoming standard in my reviews, here's the quibbles! I have a few with Dead Set but they are pretty minor. Firstly it would have been nice to see a little more of the zombie apocalypse but I'm guessing this was a bugetary issue and not seeing more of what was happening in the rest of the world played well in the context of the plot.

Secondly I did feel the use of filters was a bit over done. But this is a fairly common trend in many productions these days; it seems that directors just can't resist tweaking the colour balance these days. In horror in particular it seems derigeur to tint your cinematography either blue, green or grey. However I am begining to grow a bit weary of it all - c'mon guys there's nothing wrong with showing the colours as shot sometimes!

Finally I was disappointed there wasn't more of the Davina zombie! Apparently though they only had Miss McCall for a day's shooting, which was a bit of a shame. I'm sure had she been available for longer, Charlie would have had her leading the charge in the finale when the dead inevitabley break into the house. Still it has to be said, Davina played a great ghoul!

Dead Set is brutal, bleak and above all socially incisive - all of which I'm sure will ensure that it features high in top ten zombie lists for years to come. Admittedly it won't be knocking any of Romero's classic trilogy off their perchs but Dead Set gives Fulci, Wright, Boyle and Synder a real run for their money - and some of you may well rate it above Romero's last two zombie outings...