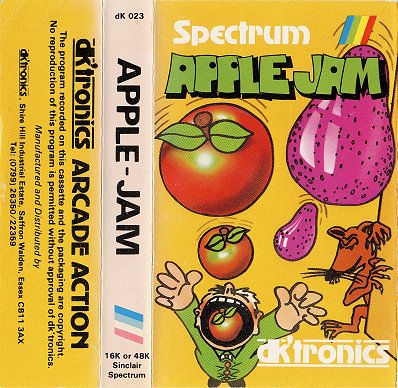 Welcome once again dear fiends to the 'Orrible 'Ouse of Terrible Old Tat! Over the past few weeks we have fiddling with the volume levels on our battered old cassette tape player and delving into the world of home micro games. Now the gaming landscape of the early 1980s was initially at least mirroring the console game market, with the key difference that the games came on easily pirated tapes rather than expensive cartridges. However as programmers and designers got to grips with new and ever expanding computing power of the mighty micros, computer gaming would venturing into new and sometime rather weird territory.

Now a perfect example of this is the output of UK based firm DK'Tronics Ltd. This company was formed by a chap called David Heelas, and began back in 1981 as a one man operation he ran in his spare time. DK'Tronics got started  with an expansion pack for one of the first home micros, Sinclair's ZX80 (which actually came in kit form and you had to assemble and build yourself).  By the time the ZX81* appeared on the scene (which thankfully didn't come in a kit), Dk'Tronics were producing keyboards for both the ZX80 and the ZX81, plus had ventured into the world of games with an early racing sim 3D Grand Prix.

And while DK'Tronics would continue to produce hardware, including a whole range of add-ons for the ZX Spectrum, they also produced a string of well remembered and innovative games, many of which were devised by micro gaming legend Don Priestly. However before they began publishing classic titles such as Dictator, the early gaming output of DK'Tronics was very much *ahem* inspired by arcade classics - hence in 1982 and 1983 they released the likes of Munch Man (a Pac Man knock-off), Meteoroids (an Asteroids clone), Galactians (go on guess!) and Centipede (which was a clone of.. erm... Centipede). However as the market expanded, DK'Tronics set their sights higher and began producing games that no longer merely *ahem* emulated a coin-op classic. And while they would deliver some innovative and well-loved titles, their first steps in that direction were a wee bit shaky. And to be frank, bloody weird! Ladles and jellyspoons, welcome to the world of Apple Jam 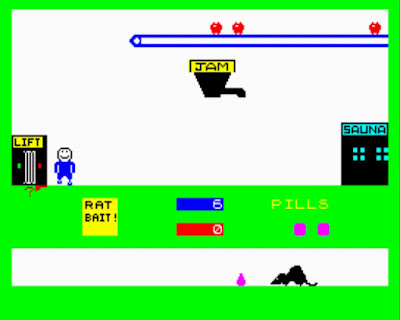 I swear this is a real game!

This game which appeared in early 1984 was written by Ed Hickman, who would go on to work with Don Priestly on innovative DK'Tronic titles such as Zig Zag and Minder. However Apple Jam is something else... I guess you could call it innovative. It's certainly different. The basic premise is that you are at a factory making, you guess it, apple jam. For reasons that are unlikely to ever become clear, the sweet sticky jam drips from a spigot tap and there's also a conveyor belt which for some reason dumps apples on the floor. Your job is to run your little man from left to right and catch the falling jam and fruit. In his gob. Obviously. Just like you would in any real factory. However there is of course a catch... several catches in fact... 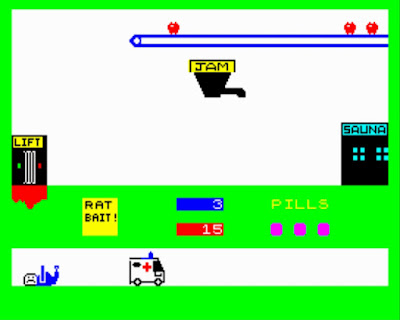 Firstly, and I swear I'm not making this up - see the screenshots for proof - beneath where your little sprite man runs back and forth, there is a tunnel where a rat constantly runs. Now everytime you miss scoffing an apple or a blob of the jam, they fall into the tunnel and the rat gets them. And every time it eats, Ratty gets bigger. And when he gets to a certain size, he goes all James Herbert and comes to eat you! However you can avoid getting gnawed to death by legging it to the elevator on the left hand side of the screen. And if you time it right, you can splat the rat with the elevator, which leaves a nice puddle of blood under it. A puddle that gets bigger and bigger the more rats you splat. Brilliant eh!

But that's not all. For every time you pig out on apples or jam, you put on weight. So much so that it doesn't take long for your little man to start to resemble a Mega City 1 fatty. And if you get too fat - and here I quote from the actual game instructions - "you'll have a fit" and lose a "diet pill" i.e. a life. However you can fight the flab by running over to the right-hand side of the screen and popping in the sauna there, which will slim down to your original size. Of course, there is a downside to this - because while you're in the sauna, the jam is dripping and the apples are dropping... and Ratty is getting bigger and bigger again. 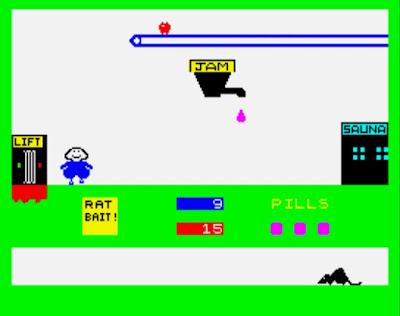 And if things weren't difficult enough already, every now and again a giant hornet, presumably escaped from a Bert I Gordon movie, comes to buzz you. Sadly you can't use the elevator as a giant fly-swatter, and so you have to take refuge in the sauna, meaning Ratty gets another free lunch or two... On the upside, there is a mysterious box marked Rat Bait which allegedly drops and reduces the ravening rodent to its original size. And I say allegedly because the magic box only drops when you hit certain scores, and generally it seems most people never lived long enough to actually trigger that happening. For Apple Jam is insanely difficult - it doesn't take much troughing for you to hit morbidly obese levels, and hence most of the time you are just trying to squish the rat while dodging that twat of a hornet. 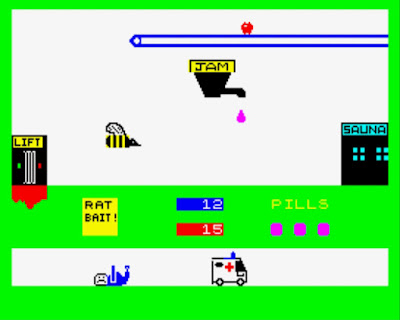 Killed by the stripey bastard again!

But in practice, I'm not entirely sure that this mattered much to the kids of the '80s. Certainly everyone I knew who had a copy of Apple Jam were not usually attempting to get a high score, but instead were trying to get the biggest river of blood possibly oozing out below the elevator! Ah, they just don't write 'em like this anymore! Sadly these days even the game's basic premises i.e. over-eating for fun and profit would be frowned upon, never mind splatting rats...

Not sure if the Centepide clone/name got them into trouble, as it was "Milli Bug" by about 1983 for the C64. Pretty good game.