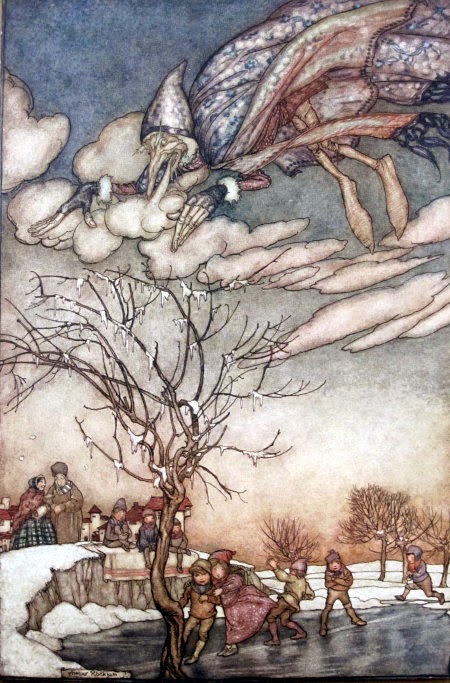 Winter is here and old Jack Frost is back up to his old tricks, a-nipping at our nose once again. But what do we actually know about this frosty sprite? For despite Jack Frost being a familiar figure in the popular imagination, he is something of a mystery. Consider for example, why do we have no clear image for him? Sometimes he's depicted as an old man, sometimes as a boy, and sometimes as some species of icy goblin!

Now if you were to do some causal digging here and there, you will find the popular wisdom on the subject is that the figure of Jack Frost is derived from Norse mythology. From a minor demi-god named Jokul Frosti, whose name means literally "icicle frost", and was reputed to be a son of Kari, god of the wind to be precise. However there are a few small problems with this theory. Firstly there is no "Jokul Frosti" to be found in Scandinavian mythology - there is a Jokul who was the son of a wind deity, but he bears no resemblance to the Jack Frost of popular lore, possessing no special powers or supernatural duties, and what is more appears to have been just an ordinary man and is barely mentioned in the old sagas and tales. Closer to the mark there was a Frost Giant named Frosti, but details about him are even scarcer, and this wintry titan had no special duties regarding winter weather either. 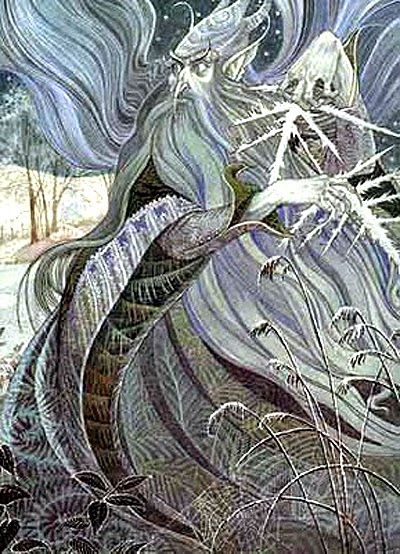 Of course we should also note that the Vikings didn't have any glass windows on which famously Jack Frost paints his marvelous icy arabesques, which rather deprives our wintry sprite of his most famous activity. Hence given the lack of any mythological mention of him or anyone like him, we should rightly discount these dubious claims of Norse origins and move along before we catch a chill!

So where does Jack come from? Well Jack Frost first appeared in artwork on October 5th, 1861. It is a cartoon by Thomas Nast, which appeared Harper's Weekly. It has the caption - OUR NEW MAJOR-GENERAL, and refers to a speech made by Major-General Benjamin F. Butler, who stated "Our faithful old Ally of the North, GENERAL JACK FROST, shall come and clear away the Malaria of the South, and we shall march Southward from this place, and there shall be no footsteps backward until this Rebellion is crushed out of this Union." At the time in the Civil War, there had been outbreaks of cholera, and it was hoped the coming freezing winter weather would kills of the infections hindering the war effort. 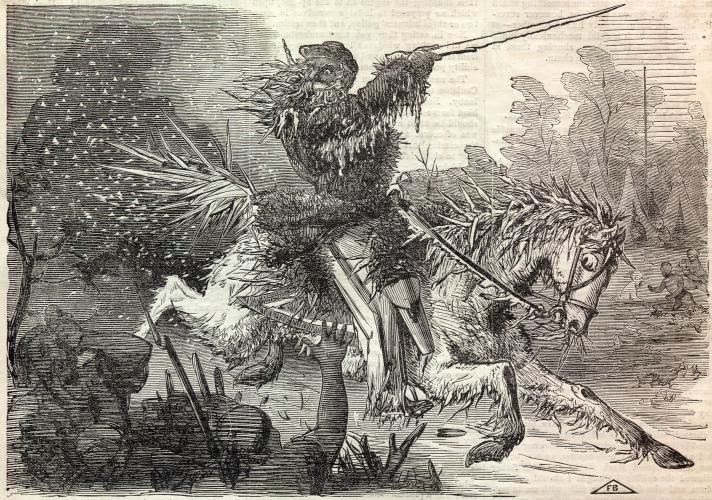 However later, much like that other winter icon Santa Claus who Nast also first drew in a satirical cartoon, would later draw another less bellicose version of Jack in a non-political context.  In the illustration Central Park Winter published in 1864, Jack Frost appears as the genial fellow presiding over the scenes of wintry fun presented. However you wouldn't necessarily recognise them as the same fellow - indeed if it weren't for the caption, the Central Park Jack you might very well  take to be another Nast version of Santa.

Also in the 19th century, poet Hannah F. Gould penned a much anthologised poem named Jack Frost and these verses presents the essence of the character we know today, a supernatural character who is responsible for freezing weather, who paints frost patterns, and displays a sense of mischief too -

The Frost looked forth, one still, clear night,
And whispered, "Now I shall be out of sight;
So through the valley and over the height,
In silence I'll take my way:
I will not go on with that blustering train,
The wind and the snow, the hail and the rain,
Who make so much bustle and noise in vain,
But I'll be as busy as they."

Then he flew to the mountain and powdered its crest;
He lit on the trees, and their boughs he dressed
In diamond beads - and over the breast
Of the quivering lake he spread
A coat of mail, that it need not fear
The downward point of many a spear
That hung on its margin far and near,
Where a rock could rear its head.

He went to the windows of those who slept,
And over each pane, like a fairy, crept;
Wherever he breathed, wherever he slept,
By the light of the moon were seen
Most beautiful things - there were flowers and trees;
There were bevies of birds and swarms of bees;
There were cities with temples and towers, and these
All pictured in silver sheen!

But he did one thing that was hardly fair;
He peeped in the cupboard, and finding there
That all had forgotten for him to prepare -
"Now just to set them a-thinking,
I'll bite this basket of fruit," said he,
"This costly pitcher I'll burst in three,
And the glass of water they've left for me
Shall 'tchich!' to tell them I'm drinking."


Indeed this early literary appearance, he's not actually mentioned by name, and very tellingly up until the 1920s the poem was often printed under the alternative title of Freaks of the Frost - which rather suggests the phrase 'Jack Frost' might not have spread into common enough usage to make sense as a title for audiences everywhere.

In a similar vein, Charles Sangster penned a verse for children entitled Little Jack Frost which appeared in New York magazine The Aldine (Vol.7, No.16, 1875).  While Gould's verse has something of the flavour of folk tales to it, Sangster's poem is more a modern nursery rhyme, with younger children in mind. And not too long after Jack would begin appearing in children's fiction -  in 1902 turning up as a character in Frank L. Baum's book The Life and Adventures of Santa Claus. And from then on Jack becomes linked with both magical stories and Christmas, and has appearing in all manner of books, comics and movies. 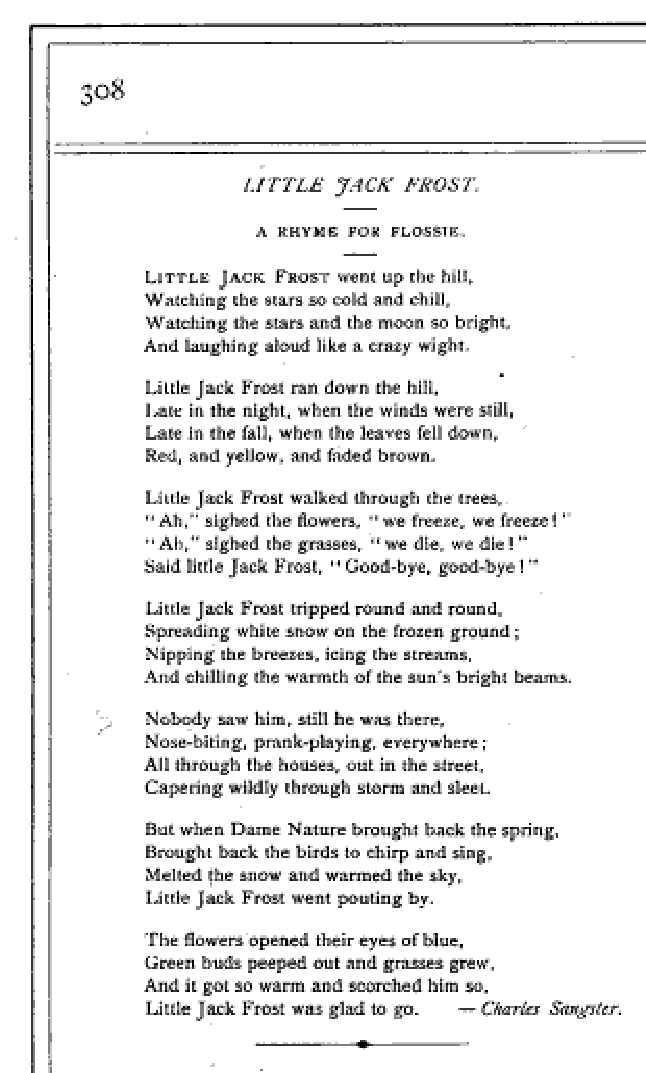 But what of his origins? Well consulting the archives of the Oxford English Dictionary, we discover that the first written reference to Jack Frost they cite comes not  from some Viking saga, or even Merrie Olde English folk tales, but surprisingly late in the day, in 1826 to be precise. And rather than being in a tome on legends or folklore, it actually appears in the pages of a British journal, The Sporting Magazine when it was reported that "Jack Frost, however, put a veto on our morning's sport".

However purely by chance while researching another famous wintry figure, old Father Christmas, I discovered an earlier reference to Mr Frost. I was consulting an ancient tome - believed to have been published around 1730 and penned by that ever prolific scribe Anonymous.  The book is called Round About Our Coal Fire, or Christmas Entertainments with the added subtitle - "Together with some curious Memoirs of Old Father Christmas; Shewing what Hospitality was in former Times, and how little there remains of it at present."

Now in the first chapter in which our unknown author details the reminiscences of Christmases past alluded to in the subtitle, he remarks -


This Time of Year being cold and frosty generally speaking, or when Jack Frost commonly takes us by the Nose, the Diversions are within Doors, either in Exercise or by the Fire Side

So then Jack has been dancing merrily through our winters for a good hundred years earlier than I had previously reckoned! Or rather, perhaps I should say, he has been dancing through our language since at least the 1730s - the causal way our mystery writer drops in the reference to him makes it plain he expected his audience to know exactly what he was talking about. But all the same, I suspect Jack Frost has a linguistic, rather than a mythological basis.

In England from around the 1500s onwards, "Jack" was a common slang term for a man, usually a funny or clever fellow. And this is not only the origin of words like "jackanapes" (a chap who's a cheeky monkey), "jack-o-lantern" (a fellow who held a light), and sailors being 'jack tars', but it is also the origin of all the various Jacks in fairy tales, nursery rhymes and folk tales. In addition, people have always enjoyed playfully personifying various objects and abstracts, and hence in England, where we famously love to talk about the weather, inclement winter weather would naturally be personified in this way. Hence the winter elements that doodles on your window, creates slippery slides out of pathways and seemingly to nips at your nose, would of course be given the name of a cheeky chappie - and hence Jack Frost springs to life.

So then, it would appear that our wintry sprite emerges not from ancient legend, but from a simple turn of phrase. He first bounds into our language and then as literature written specifically for children begins to emerge in the late 19th and early 20th centuries, Jack dances into our imaginations. However that is not to say that in the lands of myth and legend, there are not figures who personify winter and cold weather, but they are tales for another day... 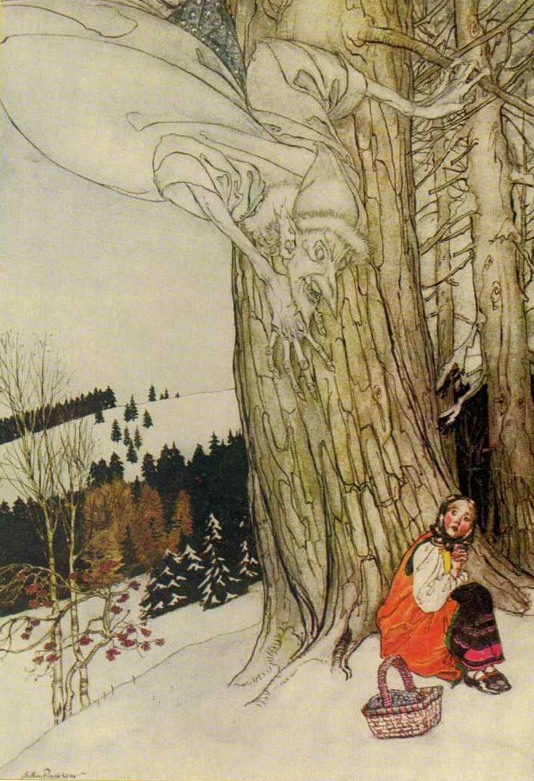