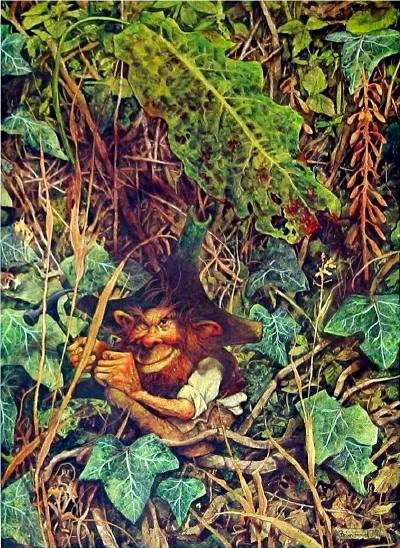 In this little sub-series on various artifacts allegedly left behind by the Fair Folk, we have seen a common pattern emerging, namely that objects ancient and/or mysterious have had fairy origins attributed to them. In the cases of both the Fairy Flag and the Luck of Edenhall we have seen how valuable and rare items that were brought back from the Middle East have had their true origins forgotten and tales of faeries have filled in the gaps. However the origins all such faery finds are so easily traced and explained.


One of the most curious of all faerie artifacts appeared in an Irish edition of the long running magazine Country Life in 1973. The object was discovered by chance in 1835 in South West Ireland and remains a mystery until this very day. A farm worker in the Beara Penisula happened to notice a small item on a country road. Bending down to examine it more closely, he discovered it was a tiny shoe, just under three inches long. The mystery footwear was black, with eyelets for tiny laces, and resembled the type of shoe popular with Irish gentlemen in the previous century. Of course Ireland is home to the Leprechauns, the fairy cobblers, who are famously shy around us tall folk for our habit of trying to steal their gold. Had our clodhopping labourer disturbed one of this fellows, who took flight and accidentally left his work behind?

Our puzzled farmer took his find to the local doctor, who was also baffled by it. The shoe eventually passed into the possession of a County Cork family, the Somervilles of Castletownshend. And while touring in the USA, Dr Edith Somerville took the show to Harvard University where it was examined by experts. They concluded that it was hand stitched, and thought it to be made from mouseskin.

Now there are two possible explanations for the shoe, however neither really seem to fit. Firstly if you or I were to find a tiny shoe we probably would assume it had belonged to a doll. However in the case of this particular lost shoe, the size and shape of the foot it was made to fit is somewhat different from the dainty feet of dolls.  Furthermore mouseskin is a peculiar choice of material for constructing  toy, and indeed no one yet has found a doll of the same vintage sporting such shoes.

A second explanation is that the shoe was made by an apprentice to showcase the skills he had learned. It was common for tradesmen to set their charges unusual and difficult tasks to test the skills they have been taught, and the very fine, tiny stitching used in the shoes could well be a challenge set to an apprentice in cobbling or needlework. However as this accepting this theory raises several troubling questions. As Patrick Harpur notes while discussing the shoe in his book Daemonic Reality (Penguin 1994) -

If it were an apprentice piece, how did it come to be found on a remote sheep track? Why was it made in the style of the previous century? Why is it such an odd shape? 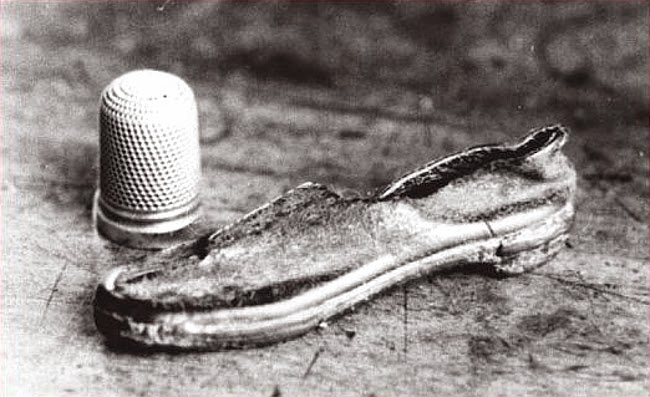 This particular story certainly raised an eyebrow. Thanks for putting this up - it is one of the best I have seen.

I also came across a reference to the finding of a tiny overcoat with miniature tobacco burns in it, as if from a tiny pipe, but sadly I've found no further details on it... yet!

My grand mother got the left pair

There are things unexplained, and this is one. For me seeing is believing.