DOCTOR WHO 7.7 - The Rings of Akhaten 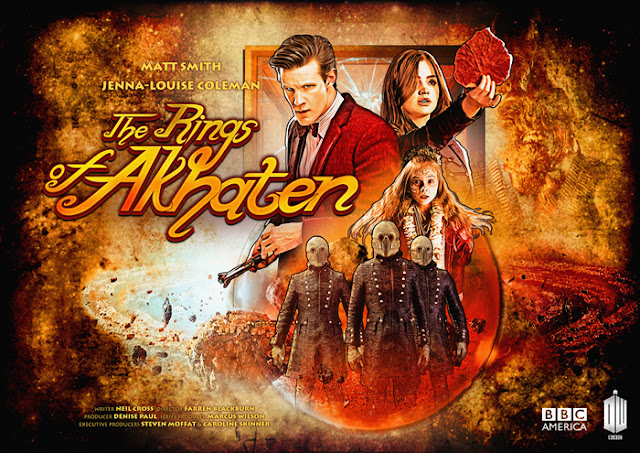 Scanners indicate the presence of spoilers!


The Rings of Akhaten was a big, colourful, emotional episode and, well, not the kind of episode I was expecting from the creator of the bleak, gritty and dark cop show Luther! However it's fair to say that first time Who scribe Neil Cross has created an adventure that going to keep folks talking for some time, and that's because it's one of those episodes that either knock your socks off or leaves you yawning... But I'm getting ahead of myself!

Let's have a look at the basics first. Well, we got a nicely realised visit to alien climes, complete with a whole  Cantina bar's worth of different and new races. Obviously Matt Smith was on good form as usual, however special mention and praise for That Speech. Also as I'd hoped we got to see a different side to Jenna-Louise Coleman - yes, folks there was plenty of nice character moments here and generally showing her to be a lot more than a collection of witty one liners and a sassy attitude.

Now then, on the other hand this episode did have 'first time writer to Who' written all over it - and the reason I say that is I have noticed over the years that new hands do have a tendency to look to the show's past and assemble a script magpie-style. And in The Rings of Akhaten you could certainly identify elements lifted from the program's recent history.

To begin with, the whole first outing for a new companion being an impressive event chosen by the Doctor was very reminiscent of Rose's maiden voyage in the TARDIS in The End of the World. Furthermore the rousing third act with the uplifting crowd singing echoed Gridlock, and the Doctor delivering a stirring monologue in the face of an awakening ancient monster god will remind more than a few viewers of a similar scene in The Satan Pit.

However in fairness, in a show with a fifty year history, it's rather hard to write something that a knowledgeable can't find a parallel for in the past. And the real question isn't whether Mr Cross has been *ahem* heavily inspired by previous adventures but whether this new story works or not. And that's where this episode gets a bit tricky.

Firstly to drawn another parallel from the recent past, this is very much a story in the mould of The Beast Below - the important feature here is not the story. The plot line is merely a McGuffin to establish the Doctor and new companions relationship,; it's where they learn how the Doctor operates and he discover whether they have the heart to adventure with him.

But more importantly The Rings of Akhaten is one of those big colourful stories, it's all about big spectacle, grand speeches and a torrent of emotion. And those aims are paired nicely with the plot line which is about feeling and music and the archetypal power of stories and sentiment. It's not about plot detail, it's not even about thrills, it's about the emotions. It's an episode that is working on an  impressionistic level rather than centering on narrative intricacies, it's aiming for the heart rather than the head.

Now if you go along with the story's tide, you may well be swept away by the end. And as such, if it works for you, you rate it higher than probably any of the other stories I've reference in this piece. However if, for example, you've come here expecting a slice of SF or a romping adventure, then all the operatics of The Rings of Akhaten will, well, ring hollow.

And which side of the fence does your humble reviewer fall? Well, I can understand why some will be unimpressed and even why some will hate it, for this kind of story's conclusion hinges upon an emotional moment rather any strictly logical twist. However that's an artistic trade-off I can live with, and indeed from how the story it unfolded, it was the kind of end-game I expected.

Now I did enjoy it and I did like it, but I wasn't completely bowled over with it. However in all honesty, I'm not sure whether that was the episode itself not quite succeeding in provoking the desired in effect or whether  that was down to me being distracted by my internal reviewer making notes - for certainly in the big finale I was half thinking of the howls of 'this doesn't make sense!' and 'Pah! Sentimental guff!' that would be emanating from some corners of fandom. And also trying to decide if there was a lift from Blade Runner in the Doctor's big speech. Such distracting backchat from the back of your own bonce is one of the perils of reviewing...

I guess this is one of those Marmite episodes - as so often the big emotional ones are. But hey, whether you loved it or hated, next week we have a monsters on a submarine tale that looks set to deliver the kind of  old school thrill and chills that we all love.

Bring on the monsters on the submarine to wake me back up!