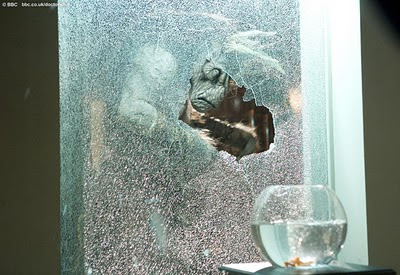 Now then, although I think I pretty much covered all the important stuff in my spoiler free review, I couldn't let this episode pass by without having a closer look at it. And why? Well it's got a bloody Minotaur in it for a start!

And aside from a long standing love of these fabled man-beasts of Grecian myth (thank you the Ladybird's Famous Legends Book 1), the Minotaur is subject to an unofficial and somewhat jokey fan rule of Doctor Who. And this states, rather bluntly, that any story with a Minotaur in it is shit!

Previous to The God Complex, this legendary monster has appeared three times in Who history, and it is fair to say that the results haven't exactly been the show's finest hours. The first Minotaur appearance was in The Mind Robber, a second Doctor adventure which saw the TARDIS crew marooned in the Land of Fiction, where they encountered a whole slew of characters and creatures from stories, including our bull-headed friend, Medusa, Gulliver, Rapunzel and a comic hero from the future the Karkus who appears to be an uncanny prediction of Arnold Schwarzenegger.

Now I quite like The Mind Robber, however its surreal and quirky nature make it something of a love it or hate it affair. However as the Minotaur only appears briefly, it's also true to say that generally fans weren't thinking of this story when the 'rule' was coined.  Oh no, it was the horrors of the following two tales that featured the Minotaur more heavily that inspired it.

In the Third Doctor adventure The Time Monster, we had a confusing story involving Atlantis, Chronovores and the Master executing a rather dubious evil scheme and making a right TOMTIT of himself. On the plus side, we have the legendary Ingrid Pitt as the Queen of Atlantis, Dave 'the body of Darth Vader'  Prowse as  the Minotaur, and this serial added much to the mythology of the show. On the downside though, we have a plot that makes little sense and the lead monster, Kronos the Chronovore, looks like a bizarre chicken-chess piece hybrid constructed by origami. 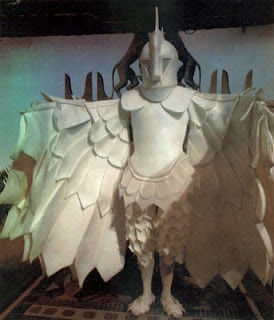 However with its cult favourite casting and a truly bonkers storyline, The Time Monster can be said to possess a certain charm. Which is more than can be said of the next Homo Bovine outing, The Horns of Nimon...

On now paper, I'm sure this Fourth Doctor adventure looked like fried gold - essentially being the Theseus myth transplanted into outer space. However what reached the screen was a bored looking Tom Baker mucking about in the same six foot of dull white corridors over and over again, and annoying the titular Nimons, a race of disco-galactic Minotaurs in platform heels. Yes, a promising idea not so much let down as ruthlessly torpedoed by a grand slam of poor script, direction, design and performances. And it's no surprise that this serial regularly features in the round-ups of the worst Who story ever made.

However what is very surprising is that The God Complex turned out to be a sequel of sorts to this much (and rightly) maligned story. But more shocking still was that this cousin of the Nimon tale actually was a rather decent outing for the Eleventh Doctor! Proof, I guess, that rules are made to be broken and that you can teach on old dog new tricks. 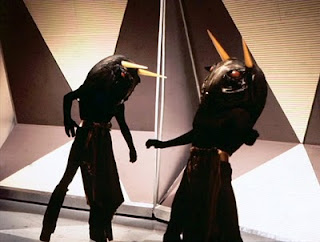 But that wasn't the only surprise in store; for all those not familiar with the horrors of the Nimon (oh you lucky breed!), the big shocker was the departure of Rory and Amy. Now obviously this revelation set many viewers all of a flutter, as although the previous episodes had seemingly been laying the ground for them leaving, it was something of surprise for them to go right now.

However others were less convinced that this was really their departure from the show. After all, both Arthur Davrill and Karen Gillan had said recently in interviews that they would be back for the next series. However to keep the big secret under wraps, they naturally would say that! And earlier there had been speculation that they would leave at the end of the current series following announcements of the pair's future acting commitments which appeared to rule out them having the time to film Doctor Who.

Now I don't think we've seen the last of the Ponds, and it's a safe bet that they will be back for the final episode of this season The Wedding of River Song at the very least. However I tend to think that perhaps their travels in the TARDIS are over and that after the finale it might be just be the odd guest appearance now and again when the Doctor drops by. Certainly I have the impression, that this time time our Time Lord hero may make more of an effort to visit these particular old friends.

Then again with Mr Moffat in charge, there's all sorts of timey-wimey means by which they could reappear. And I think it's also a very safe bet that the final episode of this series will feature a fair few twists and turns. For example, I wouldn't be at all surprised to learn that River Song is not actually Melody Pond and than Amy and Rory will leave again with a babe in arms to raise...