I suspect that Jim Moon doesn't actually exist, as I've only ever seen one picture of him (or someone claiming to be him). How can we be certain that Jim Moon is a real person, and not just a clever ruse to lure innocent listeners into a web of dreams?? 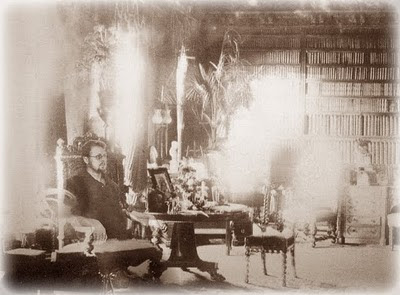 So asked Mr or Miss Anonymous...

Heh heh heh! I know how you feel... I often doubt my own existence! But in the wise words of Slartibartfast "that's just perfectly normal paranoia, everybody in the Universe has that!"

Defining what actually exists is an increasingly tricky question the closer you look at it. You've all heard the old saying "If a tree in a forest falls down and there's nobody around, does it make a sound?" - well quantum mechanics suggests that if there's no one to observe an event it doesn't actually happen, fnord so actually there is no tree or forest in the first place if there's nobody there! In such a universe, are any of us truly real?

Hence it’s very hard to prove I actually exist! I can assure you I do but if I was fictional then I would say that! Of course if you take that view, then I must refer to the Good Bok, and quote the words of Our Lord Brian “Well what sort of chance does that give me?!?”

And as this is an anonymous question, all the Gentle Readers out there may indeed be wondering if in fact I actually posted this to myself, and hence what you are actually reading is the textual equivalent of a Punch and Judy show, orchestrated by a secretive cyber-mastermind who dwells in a clock tower.

You can perhaps take scepticism too far…

However I will say that if I were a fictional character striding about the real world, firstly I’d be up before the Beak in Literary Court in no time at all – just look what happened to Jerry O’Flynn!

Secondly and less obscurely, if I was a fiction then my tweeting would be far more interesting! It wouldn’t be “mmm toast and Blakes 7” but “Just fed Ninja #6 to piranhas for letting that man from the Diogenes Club access the complex” and “Receiving visitors from Dimension X – do they like jaffa cakes?”

Incidentally, there is actually more than one photo of me floating about. They do surface from time to time on my Twitterfeed but I don't overdo it. Partly because years of absorbing pop culture has taught me that when a creative person goes from 'look at what I produced' to 'look at me!' the quality of their output takes a nosedive... As an old mentor of mine used to say “it doesn’t matter what it claims on the label, it’s what’s in the tin that matters”

But if I'm honest it's mainly because I firmly believe I have a face for radio! Plus as most of my family and friends either aren't on the Facebooks, or if they are, don't use it very often, I don't put up lots of personal snaps up there.

Mind you, the concept of “luring innocent listeners into a web of dreams” is an intriguing one! Not entirely sure what that would entail – will ask the Fishers From Outside next time I encounter them…

Then again, if you switch on the news for five minutes these days, a world of dreams where interesting genre and cultish material is celebrated in a relaxed and hopefully amusing manner does look a far more pleasant place to dwell.

And if my assorted online ramblings may uphold such old school Reithan values of informing, inspiring and entertaining all at the same time, then I’m more than happy to lure in the unwary to a realm that is both a solace and a counterbalance to constant negativity, cynicism and vapid celebrity worship that pervades so much of the media :)

Very intriguing blog you have here. Had to follow you, I was compelled by some force. :p

Glad you have on board sir!