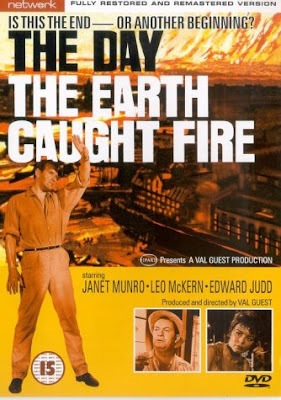 From the title, this movie sounds like a cash-in on the considerably better known The Day The Earth Stood Still, and from a quick glance at the plot synopsis it reads like a sci-fi tinged disaster movie.. Though it is one of a long line of science fiction films from the ‘50s and ‘60s dealing with the consequences of atomic power, The Day The Earth Caught Fire is actually a very different beast. Rather than bringing us the attention of creatures from beyond the stars or spawning rampaging giant monsters, in this film atomic weapon testing has had a far more plausible result – it has suddenly and disastrously altered Earth’s climate.

Now obviously for an island where discussing the weather is a national pass-time, it’s hard to imagine a more quintessentially British science fiction threat. But from HG Wells right up to Ken McLeod, British SF has always contained a strong vein of social commentary, and The Day The Earth Caught Fire is no exception. Its approach to the genre fits comfortably between John Wyndham’s social apocalypses and JG Ballard’s dystopian urban nightmares. Rather than square jawed military types and clean cut scientists, this film’s protagonists are journalists and office workers. Rather than the Establishment fending off the screen threat, we get a very realistic drama following the ordinary people affected by the changes wrought by technology. It’s a very refreshing street-level view of the end of the world.

Director Val Guest was not stranger to the genre, having helmed a trio of Nigel Kneale adaptions for Hammer (The Quatermass Xperiment, Quatermass II and The Abominable Snowman). And despite Kneale’s grousing about the compression of this original TV plays into the movie format, with these films Guest had shown he grasped the key dramatic elements of the original works – that character depth, realism and intelligence are what give Kneale’s stories their power. Outside the SF/horror fields, with films like Expresso Bongo and The Camp On Blood Island he has also demonstrated a deft touch in handling real-world drama on screen. And with The Day The Earth Caught Fire, he created a perfect blend of intellectual SF and social commentary.

Guest understood that for any genre picture, establishing getting the audience to suspend their disbelief is paramount. Hence, like the first Quatermass adaption, Guest chose an almost semi-documentary style. With a good deal of location shooting and creating a virtual replica of the Daily Express newsroom which is where much the film’s scenes are set, Guest brings us a convincing screen vision of 1960’s London which lends the later scenes of climate-induced chaos a great deal of realism.

Previous to going into the movie business, Guest had worked in Fleet Street and his previous personal experience really shows in this film. He even persuaded Arthur Christiansen, the editor of the Daily Express from 1932 to1956, to play himself in the movie. This verisimilitude extends beyond the locations and really shines in the script which Guest himself co-wrote with Wolf Mankowitz. There’s none of the usual ‘hold the front page!’ clichés here; instead we get a real insight the journalism of the day dealing with everything from the politics of what gets into print to creeping alcoholism. The Day The Earth Caught Fire captures what was perhaps the last golden age of journalism - a time when reporters actually bothered to leave the office and investigate and report, a time when the newspapers rather television was the prime source of in-depth coverage and commentary of the news.

Back in 1961 the broadcast media as we know it was still in its infancy, and in this film radio and TV appear as little more than mouth pieces for the establishment. In this era, the public forum for incisive commentary and debate was still the press. Therefore it is for almost burnout and washed up reporter Peter Stenning (Edward Judd), aided by science correspondent Bill MacGuire (Leo McKern), to discover that the rapid climate changes have been caused by atomic testing altering the Earth’s orbit, and furthermore that the government has been covering up this technological blunder.

But there is more to this than merely a time capsule snap shot of the press of the day. In an age where so many newspaper staff seem to do little other than copy and paraphrase reports from AP feeds or invent celebrity tittle tattle, watching this film will make you lament the decline of the popular press. It’s difficult to imagine the current incarnation of the Daily Express employing journalists who would investigate and reveal a governmental cover-up, unless perhaps there was some connection to either asylum seekers or Princess Diana. And it is somewhat ironic to note that over the years the broadcast media has not only superseded the press as the home of insightful and intelligent journalism but now appears to be rapidly declining into the same maelstrom of ill-formed sensationalist drivel that constitutes much newspaper journalism today.

This tension between the broadcast and print media, the tension between intelligent and dumbed down reportage, is summed up by Macguire’s sarcastic response to a television broadcast which patronisingly explains away a freak eclipse - “And that children, is how the little bunny rabbit got its fluffy white tail!”

This quote also highlights one of this film’s many strengths – the astoundingly sharp dialogue. Rather than the usual exposition spouting ciphers, we have characters that talk like real people. The banter between the newspaper men is simply a delight – a riot of ripostes and snappy come-backs brimming with wry observations and character depth. Often when watching what I’ll term ‘movies of certain age’ one has to sit through a great deal of talking heads between the action. However in this film, the dialogue is electric and the script could serve as a master class in how not a waste a single line. The golden rule in cinema is often said to be “show not tell” – a maxim that these days is bringing us 50 cut per minute and dialogue so trite and shallow that the average puddle has the fathomless depths in comparison. However as this film shows dialogue does not need to be chunky exposition – Guest’s characters are created as much by what they say and how they say it as much as what they do.

And the script is excellently served by the main cast. Leo McKern is brilliant as always and Edward Judd delivers a fine performance as Stenning, a man losing his grip on life who rediscovers his purpose through the larger crisis really carries the film. Stenning is not just the usual hero, indeed really he isn’t the hero at all in the conventional sense, as the film is as much about his character’s journey and redemption as it is about the atomic weather of doom. Whereas in the usual SF flicks of this period, we have the dashing young hero and the wise older man, here we have Judd and McKern, world weary and bitterly cynical hacks who through the course of the film rediscover their purposes and their humanity.

The interweaving of these personal stories, more usually found in serious drama rather genre films, with the larger tale of impending catastrophe really elevates this film above and beyond the usual death rays and bug monsters. And subtleties of the character’s story arcs go far beyond the run-of-the-mill personal epiphanies of most disaster movies.

The actual disaster itself is handled very nicely. Rather astutely, the Great British public’s first reaction to the rising temperatures is delight, with thousands skiving work to sunbathe and ‘Cor Wot A Scorcher!” headlines. However things soon decline with extreme weather and flash fires breaking out. Guest’s semi documentary style really pays off here as it allows him to use a good deal of stock footage reasonably seamlessly. But despite the budget constraints, there’s some great special effects work in here from Hammer veteran Les Bowie; particularly striking is the eerie fog which envelopes London. But again it’s the human angle that really strikes home – scenes of Londoners queuing up at stand pipes when water rationing has kicked in and the whispered exchanged about black-market water supplies.

Admittedly the movie’s basic premise is that nuclear tests have shifted the Earth from its axis is somewhat scientifically wonky. But to be fair a lot more plausible than giant insects or reawakening dinosaurs. But the scenario of climate chaos Guest’s film presents rings very true today - the ecological catastrophe here is very much like the one we will be facing all too soon if we don’t sort out global warming.

All in all it’s quite amazing how relevant this film remains today. The sobering if not chilling depiction of climate change is worth the price of admission alone. And as we’ve already seen, the commentary this film makes about the media is still very pertinent. The superb script will make you’ll wish films were as well written as this today. The ending is simply fabulous – there’s one wonderful shot which I really can’t spoil for you which encapsulates the depth and ferocious intelligence of this film. It’s not one of the most well-thought out sci-fi films ever made but also one of the best films about newspapers and one of the best disaster movies to boot. It really is an undiscovered classic.

(And if all of the above doesn’t recommend this film highly enough, it features a young Sir Michael Caine as a copper, a cameo by Peter Butterworth as a newsroom hack and ‘beatnik music’ by Monty Norman!)