THE 'ORRIBLE 'OUSE OF TERRIBLE OLD TAT - Valhalla I Am Coming! 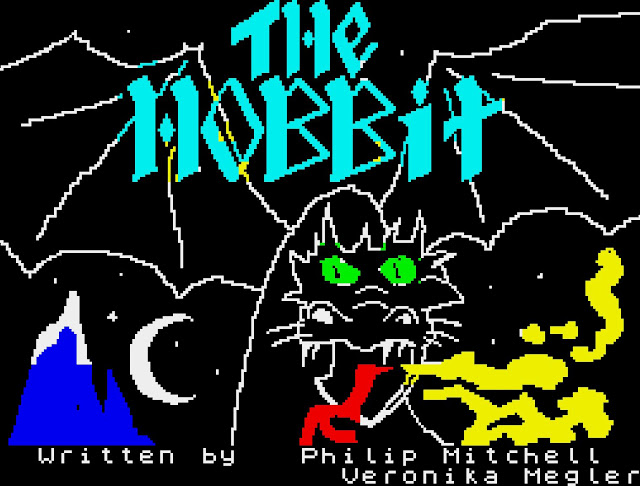 Welcome once again dear fiends to the 'Orrible 'Ouse of Terrible Old Tat! This time we are continuing our explorations of the weird world of the home micro and taking a look that some games that are truly legendary. Or at least was released by a company called Legend...


Now at the dawn of the home micro age, there was a common perception that these small and affordable computers, that didn't require a massive room filled with spinning tape wheels and an evil genius with a beard who would program it to run amuck and try and take over the world, would mainly be used for serious purposes. Such as science, education and business. And naturally as soon as the public began snapping up the likes of the Sinclair ZX81, many saw a glimmer on the technological horizon of vast empires built on writing software. And this was no mirage - indeed there was a new frontier opening based on computer publishing...

But the gleaming city which was built on software didn't turn out to be based on accounting programs. Nor was it built on rock and roll as predicted by Starship. For despite the efforts of pioneers and gadget gurus to educate the public on the power and potential of the mighty micro, what actually happened was that people bought them and then completely failed to get to grips with them. However the nation's kids very quickly mastered how to load a game, and very soon the software sections in shops were expanding to contain a tidal wave of games.

Now in these early days, one of the companies formed to create and sell business software was an outfit called Microl. However at some point in 1982, Microl very cannily realised that the big money was in games, and set up a spin-off outfit solely to create gaming titles. Headed up by John and Jan Peel, this new gaming software company was called Legend. Now although there were a host of fly-by-night companies that popped up and foisted a legion of shoddy games upon us all, Legend was no quick cash-in venture and the Peels were interested and excited by the possibilities of the emerging games scene. Quite correctly, they realised that computer games weren't just a passing fad, and that the power of the home micro allowed for gaming to evolve way beyond the arcade titles of the past and become a whole new media in themselves. And from the start they were aiming for quality. In an interview with Your Spectrum magazine (see here) , the Peels claimed "We are looking for TV quality images coupled with the interactive potential of a home computer". 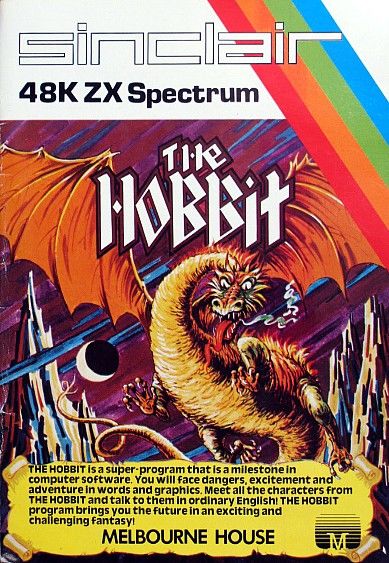 Now one of the most impressive games in the early days of home micros was The Hobbit created by Beam Software in 1982. In many ways, this computer game version of JRRRRRRRRRRRRRRR Tolkein's classic wasn't exactly breaking new ground - it was basically a text adventure, a style of computer game which had been around since the mid 1970s. However these earlier text games had been mainly played on computers in labs and universities, and the general public still generally thought of computer games as things like Pong, Space Invaders or Pac Man. However The Hobbit really grabbed the public's attention - to begin with it came with a copy of the original book (see! computers were educational!) and as well as the usual typing in of phrases such as "Ask Gandalf to open the door" and "Ask Thorin to stop singing about gold", The Hobbit came with pictures. Yes, they were primitive and took ages to load but they were based on famous illustrations and really brought the game to life.

And to the vast majority of people who were just discovering the joys of computers, The Hobbit was a massive leap forward in game-play from running about over-eating or crashing spaceships. Instead of repeating the same actions or doing the same tasks over and over again, except slightly quicker on each level, in The Hobbit you could go where you liked and do what you liked. Well, provided the program could understand the command you typed in. The text parser in The Hobbit was good, but it never understood the more frequent types of commands typed in by kids determined to mispend their youth, as seen below... 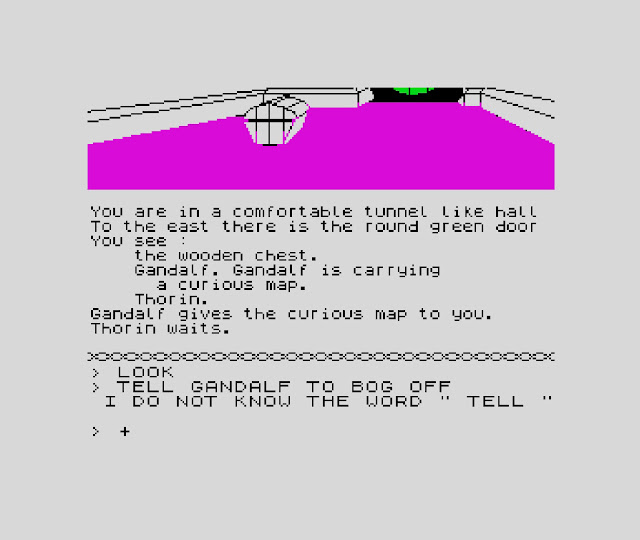 Now obviously to get anywhere in the game you had to replicate the plot line of the original book, and in fact you could complete the adventure in under ten minutes if you knew what you were doing (as can be seen in walkthrough videos like this one).  However there was nothing to stop you heading off in any direction you liked, and causing mayhem in Middle Earth. And this kind of freedom in a computer game was nothing short of astounding back in the day. In fact, the lure of just wandering anywhere you liked was so great, most players never found some the notorious bugs in some versions of the game which actually made the proper adventure unfinishable!

Now the Peels right recognised that The Hobbit was a real milestone in the development of computer gaming, not just in the technical sophistication of the game engine but also in the impact it had made on the public's perception of what games could be. They realised that games that tell players create their own adventure, tell their own stories had the potential to be as addictive as soap operas, and thus Legend's first venture was intended to pick up where The Hobbit left off. Very astutely for their first game, they chose as their subject matter some of the very same source materials that had inspired Tolkein's famous tales, Norse mythology. Andthe game that resulted was Valhalla!

Next time - we voyage to the realms of Asgard, journey to Hell, and insult assorted Norse divinites!

and no mention of those wonderful oddities this particular game caused? like the fact that Gandalf and Thorin were moving independently from the main character and could be eaten by wolves while you were bouncing about middle earth?

The oddities of this game could easily fill a blog piece on their own! I'm planning a revisit replay of this title in the near future, so maybe there will be follow-up piece!