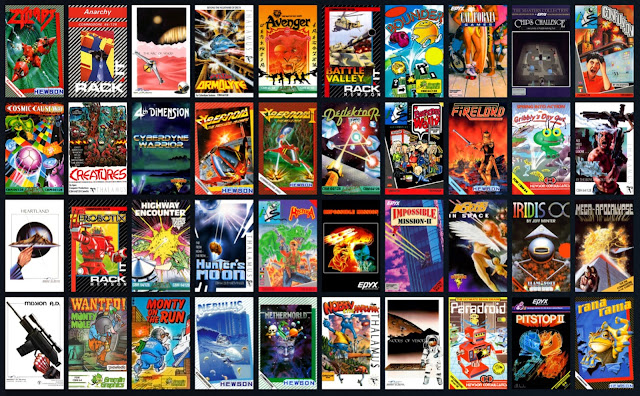 Welcome once again dear fiends to that benighted vault where nostalgia fears to tread! And rightly so too - if I catch it trampling my geraniums again, I'll shoot it up the arse with this vintage Daisy air rifle! Bastard! Anywho, where was I? Oh yes, we are messing about in the wacky world of the mighty micro! So then, I'd told you about the strange state of affairs when a home computer was a little slab slab that was mostly keyboard that plugged into your telly, and every bloody one of them had their own operating system. And we'd looked at the often tedious, and noisy business of trying to load programs, or rather, games mostly. But now it's time to dust off that battered shoe-box full of dodgy looking cassettes and explore the home micro gaming market  in the early 1980s...

Now as we mentioned last week, it didn't take long for people to realise that having software on ordinary audio tape cassettes made piracy ridiculously easy. Especially as this was the era when stereos with dual tape decks became very popular too. And so by the time the home micro market had evolved enough for the Spectrum, Commodore 64 and the BBC Micro to be battling it out for supremacy, odds on you knew someone who was hawking C90 cassettes chockful of pirated games. Of course some of the titles on these dodgy compilations would be all those classic games you were dying to play, but on the other hand, you also could safely bet that you wouldn't have even heard of half of them! For things moved fast in the world of the home micro, in an era when new models of computer were being released literally every month, games publishers were appearing just as fast. And the huge advantage of having software coming on cassettes was that it was now very simple for anyone to become a software publisher.

Obviously a great many of the games produced in this period, often by somewhat fly-by-night software houses, were of course merely variations on the big selling titles. There were still plenty of what we would now called sport sims, which mostly consisted of variants on the classic Pong (i.e. a couple of lines for paddles and a square for small). They of course were still utter rubbish but these primitive games persisted for a surprisingly long time, mainly because back then they still were what people expected a video game to be like. Although that said, the sports game did seen some programmers embracing the enhanced computing powers of the home micro, with racing games beginning to generate first person perspective graphics. And more exotic sports such as skiing, snooker and bowling were becoming very popular subjects for games too - not because there was an upsurge in interest in more niche sporting events, but because the games did not consist of yet more waggling thin rectangles about to knock a dot back and forth. Hence early home micro era icon Horace, who started life in a Pac Man knock-off called Hungry Horace, had taken up slalom skiing in his second outing. 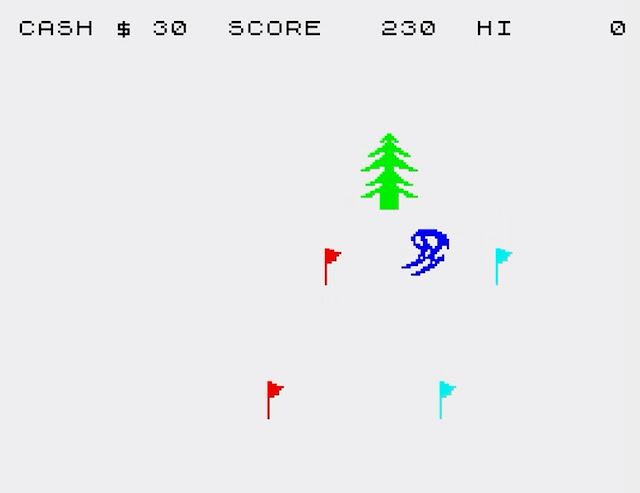 This might not look sophisticated but was a revelation in 1982

There were also computerised versions of tried and tested analogue old favourites. Computer game versions of well-loved board games such as chess and Scrabble were quick to appear, marketed very much with the angle you could now play against the computer. However in truth these early skirmishes in the human-AI wars tended to go one of two ways. Either the program was ridiculously good and delivered a whopping every time unless you were a world champion, or it was foolishly simple to the point of being naive. "Are you sure wgmumfr is word" the Scrabble program would politely ask, "oh yes" replied the nation's the kids... Also around this time the first computerised card games appeared, with various versions of poker doing the rounds, but ultimately the real winner here was computerised solitaire, which is still the cause of millions of lost work-hours a year.

However the lion's share of the market was still clones of arcade hits such as Space Invaders, Defender, Donkey Kong and Pac Man. And while there were more sophisticated games beginning to appear, such as complex text adventures, generally the prevailing conception of a computer game was that it should involve a simple scenario, straightforward controls, and consist of doing a simple task - i.e. shoot these, collect those, get over there - over and over again in a series of near identical levels. The graphics should be big and colourful symbols, the sounds should be bleepy and futuristic, and the gameplay fast.

Now by this stage, the obvious bases had already been covered. Sports of all kinds had been translated into games, all manner of cars, planes and boats had been raced, and countless enemies from across history and outer space had been shot at. However games like Pac Man or Manic Miner had proved that any scenario, no matter how weird, could be the basis for a hit game. In fact, the more off-beat the better it seemed. Now given that the home micro market was huge in the UK, the birthplace of Alice in Wonderland, the Goons and Monty Python, a great many would-be programmers took the advice of David Bowie and turned to face the strange...

Next time, we discover what happens when apples meet elevators and radical weight-loss becomes the subject of a home micro game!