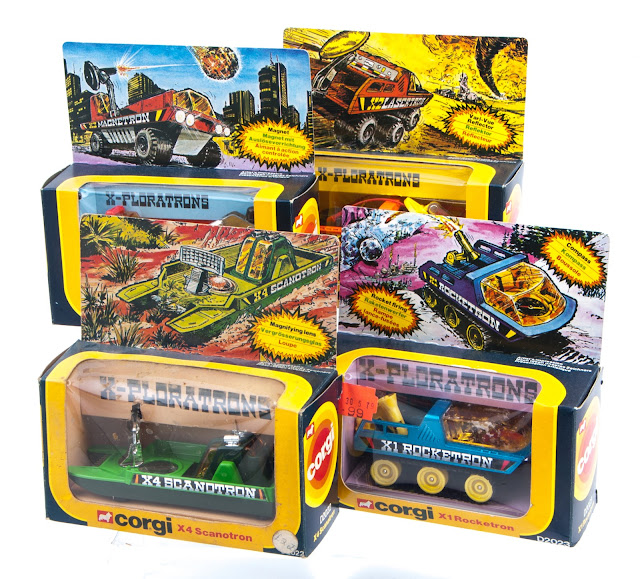 Hello dear fiends and welcome once again to the 'Orrible 'Ouse of Terrible Old Tat! Over the last few weeks we've had the toy box out and have been looking at a celebrated range of diecast vehicles that dominated birthday and Christmas lists for a good half decade. First appearing in 1977, the Adventure 2000 range from Matchbox saw the veteran maker of toy cars venture into futuristic realms to deliver a host of exciting SF vehicles. As we have discovered in previous weeks, Adventure 2000 seemingly owed a debt to the Land Master from the movie Damnation Alley (1977), which was based on the novel of the same name by Roger Zelazny.  The flagship vehicle of the range, the Raider Command would go on to appear in the pages of legendary comic 2000 AD as Judge Dredd's wheels in the epic saga of The Cursed Earth, which coincidentally owed a huge debt to Zelazny's book too.


Now whenever there's a hot new toy flying off the shelves, it doesn't take long for competing firms to start designing rival products to get themselves a slice of the action. Now in the world of diecast metal cars, Matchbox had an equally venerable competitor in the shape of Corgi, who had been making toy vehicles since the 1930s. Now since the 1960s, Corgi had had a winning hand in the shape of several tie-in vehicles, most notably having the license to make toy versions of the Batmobile from the Adam West Batman series, and the rights to make miniature version of James Bond's cars. Indeed for decades the Corgi versions of the Aston Martin DB5 and the Batmobile were bestsellers, captivating generations of kids who hadn't even been born when these iconic vehicles first hit the screen.

Therefore they were somewhat miffed when Matchbox started stealing their thunder with the Adventure 2000 line, a range that was delivering exciting wholly original fantastic vehicles, complete with the kind of special features, such as firing rockers and pop-out weapons, that made the Bond and Bat cars such perennial winners. Hence in 1979, Corgi launched a rival range to compete with these usurpers in the world of fantastical vehicles - the X-ploratrons!

Like Adventure 2000, this was a line of four vehicles featuring all new designs and exciting special features. And like their Matchbox rivals, the X-ploratrons came complete with their own back story too. According to the marketing blurb, "in a fictitious disaster-wrecked world of the 21st century, the elements rebel against man!". Now I must pause here and remark that I was so relieved they pointed out that this was a fictitious future and not an actual accurate prophecy or something! Blimey, you had me worried for a moment there Corgi!

And for that matter how exactly do elements rebel? Are they rebelling against something in particular or is it just a Marlon Brando style "whatcha got?" deal? We will probably never know! Anyhow, come and meet the quartet of super-duper vehicles that had "their own individual role to play in the battle against disaster from within and without the planet!" 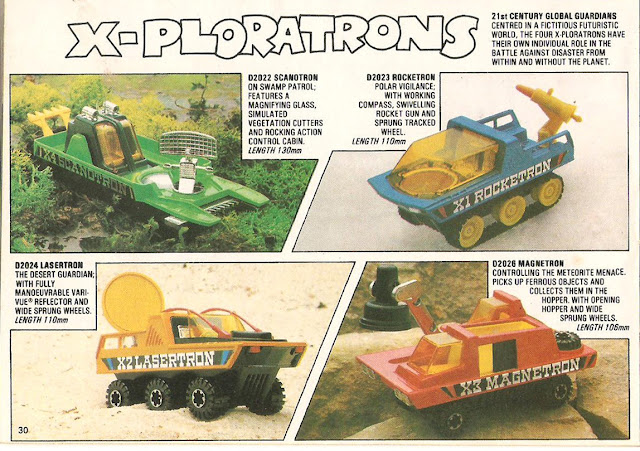 First up was the X-1 Rocketron (D2023) - a six wheeled tracked vehicle that "traversed icy wastes locating disasters with its sensorscope and fires solar powered rockets". See, destructive and green at the same time! Although quite what disasters could be averted by rocket bombardment the adverts weren't entirely clear. Deadly avalanches? Stroppy icebergs? No one was entirely sure to be honest. However the toy itself came with a real, working compass fitted inside the cockpit, and a rear mounted missile launcher to strike terror into the hearts of younger siblings and family pets. 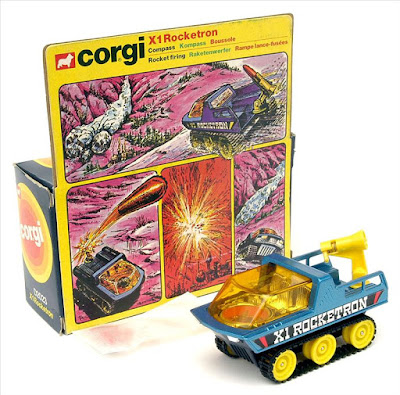 Next up was the X-2 Lasertron (D2024) - apparently in the dangerous future of the X-ploratrons "dramatic and sudden changes in the arid belt cause hurricanes and sandstorms threatening to engulf continents" and this chunky six wheeler had the job of dealing with those. And how does one truck sort out such extreme weather? Well, solar powered lasers allegedly! And hence it came equipped with a lenticular prismatic disc to turn the power of the sun into laser death! Sadly however in real life the prismatic disc didn't generate lethal beams of energy, but just changed colour from yellow to black. For me, easily the weakest of the X-ploratrons, for despite looking and sounding cool, the play value of a shiny sticker was a bit limited. 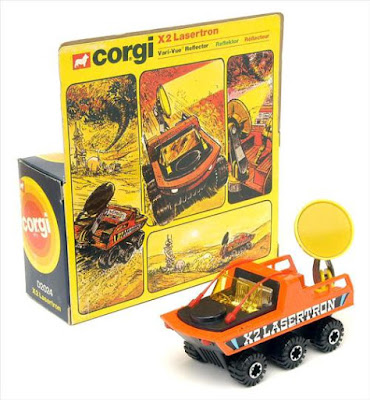 Offering far more exciting play in my humble opinion was the X-3 Magnetron (D2025) - a four wheeler designed to tackle the menace of meteorite bombardment. Although the toy didn't feature a working rocket that was depicted in the art and adverts, it did come with a moveable arm fitted with a magnet and a sliding roof compartment to store samples. Well, stray paperclips and orphan screws and nails at least. But hey, a magnet on a robotic looking arm! And magnets were cool! 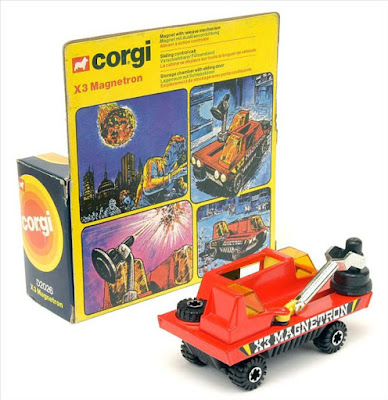 Finally there was the X-4 Scannertron (D2022), an allegedly amphibious craft that "scoured swamps" for "fissures which swamp cities with boiling mud and debris". I say "allegedly amphibious" because taking this one into the bath with you was, in reality, a recipe of peeling off decal,s and eventually, rust. But the idea of a fighting force for multiple terrains was appreciated. Anyhow, to tackles these aforementioned tectonic threats, the Scannertron came with moving jungle cutters at the front and rear, a magnifying lens mounted in the middle of the craft and a self righting cockpit. 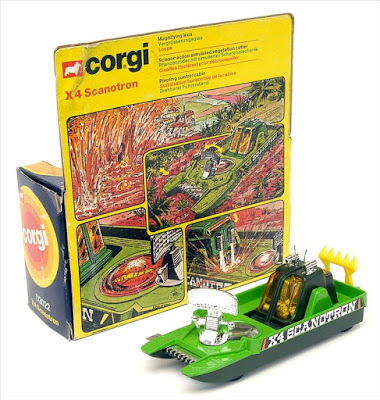 Now I think it is fair to say that the X-ploratrons were something of a mixed bag. For while the Magnetron has a magnet to play with, and the Scannerton had cutting blades and a magnifying glass to unwittingly start forest fires with, the Rocketron's missile was a bit weedy and the novelty of the  Laserton's shiny disco array would wear off before you got it out of the packet. However in fairness, not every model in the Adventure 2000 range was as exciting as the Raider Command, and so, in terms of exciting features I think the two ranges more or less balance each other out.

However I think Corgi didn't quite get their designs for their future fighting force to look quite as cool as Matchbox's. Adventure 2000's designs had a pleasingly realistic feel to them, whereas the X-ploratrons seem a bit more clunky and chunky, and with their bright, almost primary, colours look more toy-like and therefore to a certain section of their market, babyish in comparison. But on the plus side, Corgi had clearly clocked the Matchbox-2000 AD link-up, for the box art for their rival range featured gorgeous visuals from Carlos Ezquerra, the legendary comics artist responsible for classic 2000 AD strips such as Strontium Dog and Fiends of the Eastern Front, but more importantly, was the co-creator of Judge Dredd himself.


Apparently there were tentative plans to expand the range, and pictures of a prototype for a fifth vehicle do exist. Photos in The Great Book of Corgi 1956-1983 (1999) shows a flatbed launcher style truck, equipped a large ICBM - I'd guess this would have been dubbed Missiletron or similar. But sadly the X-ploratrons' mission was seemingly doomed to fail, for the range remained a quartet, and worse, the models were only in the shops for a year before being consigned to the toybox of history.

However despite burning briefly, it would seem the X-ploratrons did burn bright, for they are just as collectable as their Adventure 2000 counterparts, and command very similar prices these days. And fortunately the weather in the 21st century is still behaving itself... But for how long? Perhaps the X-ploratrons' day will come at last! 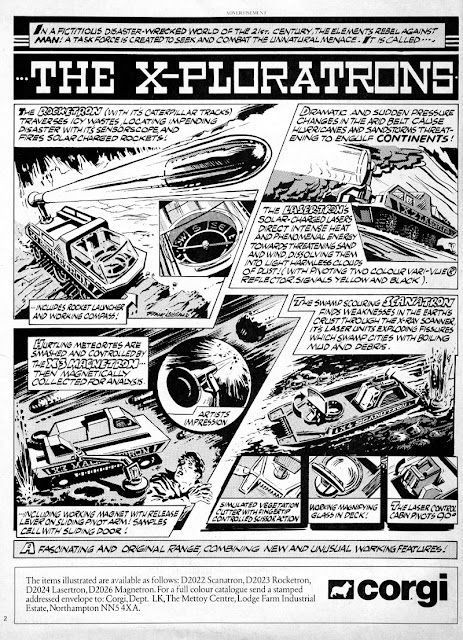 Good feature on a nice wee range. I had the Scanotron and had many a back garden adventure with it (it was wasted indoors). I had no idea it was part of a range so Im pretty sure i didnt pick it up new in a shop.
I recognise the wheels on the Magnetron as being the same as those on my Incridible Hulk pick up truck from around the same time. Still look the biz.