FOLKLORE ON FRIDAY - A Cure of Toads 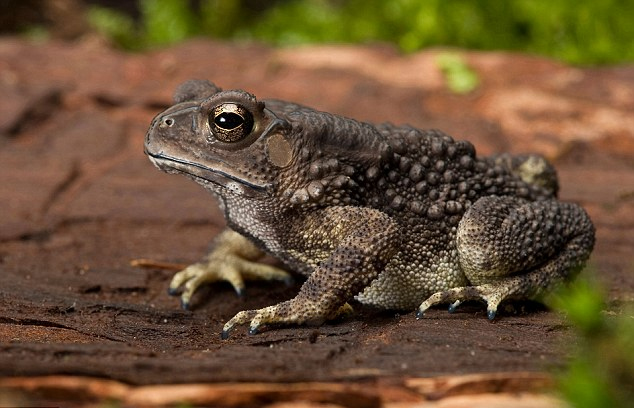 Last week we discovered what a fearsome reputation the humble toad enjoyed, or rather perhaps suffered from, in times past. Folklore associated it with poison and disease, and it was commonly thought of as a venomous predator or a witches familiar. However despite allegedly being noxious both physically and spiritually, toads were surprisingly highly sought after for a huge variety of charms and folk remedies. Both the Romans and the ancient Chinese widely employed toads both live and dead, in whole and in part, for the treatment of a huge variety of ailments. And hence in the murky world of early health care, which was as much about magic as medicine, and where superstition was mingled with science, toads remained a prized ingredient for many a cure for several centuries.

One of the best known medical superstitions about toads, and one that is still doing the rounds today, is the belief that you can catch warts from a toad. Of course this is completely untrue, however there is a factual basis, albeit a distorted one, to this old wives' tale. Essentially warts are caused by a viral infection in the skin, and it is true that the virus can be passed on by contact. Indeed you can not only catch warts from touching someone with warts but also by using items such as towels or clothes that have been in contact with infected areas of skin. Now as toads were erroneously thought to be covered in warts, it did therefore make sense to not touch them. Actually the characteristic lumps on their skin are completely natural and harmless, however many varieties will secrete toxins as a defense against predators if picked up, and these defensive poisons can be a mild irritant to human skin, sometimes causing lumps, bumps and swellings that folks in the past would have termed warts.

As toads were thought to cause warts, it was also assumed that they would also be good for removing warts, in accordance with the ancient common belief which held that in nature like was drawn to like. Hence in some regions it was said the trick to getting rid of your warts was to rub a live toad on them, and the warts would be drawn to join its fellows on the toad's hide. And this was the common underlying concept for a wide variety of folk cures and charms involving toads. It was known as the law of sympathy, and hence as toads were thought to be poisonous and venomous, naturally they were also thought to be good for treating all manner of noxious complaints. Sir Kenelm Didgy in his 1656 tome Discourse on Sympathy explains it perfectly -

In time of common contagion, they used to carry about them the powder of a toad, and sometimes a living toad or spider shut up in a box; or else carry arsnick, or some other venomous substance, which draws unto it the contagious air

And this belief was very prevalent right up to the 18th century. For example, Notes & Queries in 1869 reported the following case where a toad was being used to combat a disease that was considered both poisonous and to cause lumps and boils on the skin -

An old woman, whom I well remember, always carried in her pocket a dried toad, as a preservative from small-pox. One day... she went into the village without her toad. The small-pox prevailed in the place at the time, and the old woman caught it.

Another of the toad's natural defenses also qualified it for folk medical uses. For as well as secreting toxins when seized by a predator, toads also inflate their bodies to make themselves too big to swallow. Hence as they possessed the ability to cause swelling at will, it was assumed that therefore toads would be good for treating swellings in the human anatomy too. 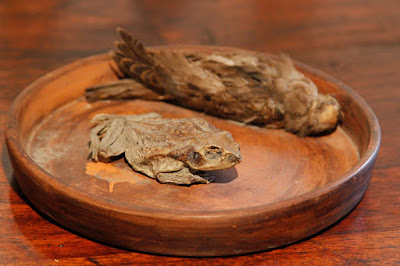 For example in rural Scotland it was said that the way to relieve a sprain was by rubbing live toad in it. Likewise many 'medicines' were developed to harness this property. In 1678 W Salmon in his London Dispensary, no doubt counting on the toad's ability to cause swelling, advised -

A dried Toad steept in Vinegar... smelt to it stops bleeding at Nose, especially laid to the forehead... or hung from the neck

Wearing either a live toad, or portions of one was a common feature cure in many a toad cure. Sometimes these remedies were more like a charm or a ritual. For example, in Cornwall, if one was suffering from quinsy, a complaint that causes ulcerations and abscesses around the tonsils - again note the key symptoms of growths and swellings - toads once again held the key to a cure...

A 'wise woman'... prescribed for him as follows: 'Get a live toad, fasten a string round its throat, and hang it up till the body drops from the head; then tie the string around your own neck, and never take it off, night or day, till your fiftieth birthday. You'll never have quinsy again'.

And if you think that cure is rather gruesome and cruel, then Worcestershire appears to have been an even worse county to have been a toad in. For Gentlemen's Magazine 1855 reports that -

However other cures were of a more medical flavour, with the 17th and 18th century seeing a boom in self qualified 'toad doctors'. A popular complaint they treated was scrofula, colloquially referred to as king's evil in ages past. This is an infection of the lymph nodes, and its symptoms manifest with the appearance of large warty growths and swellings on the face and neck. And naturally, as this was both a warty and swelling disease, toads were employed as a remedy. In an 1875 edition the ever-reliable Notes & Queries reports -

A man came in a gig, who was known as 'the toad doctor'. He brought with him a number of small bags, and the people flocked to him from far and near with toads. The 'doctor' cut off the hind legs of these toads and put the severed portions into the bags, and hung them around the necks of his patients, the newly cut limbs quivering on their naked chests. This was held to be a certain remedy for the king's evil.

Selling bags of toad legs was a profitable venture, as was the sale of assorted toad bones, toad skins and dried toad powders. Aside from 'poisonous' humors that caused plague and small-pox, or a variety of complaints that caused swellings, inflammations and ugly growths, toads were also used in another set of treatments, usually in the form of ground up powders and pills. From Roman times onward, if you were having problems with your *ahem* waterworks, or your physician believed you needed to flush your system of poisonous humours, then dried toad was prescribed as a diuretic.

Again the belief that toad would be a good medicine for causing urination came from one of the animal's natural defenses - and that is, if you pick up a toad it will urinate on you in order to persuade you to put it down again. Mind you, considering what happened to many toads collected by humans in ages past, them widdling on us might well just be sheer bloody fear of being used as a medicine! 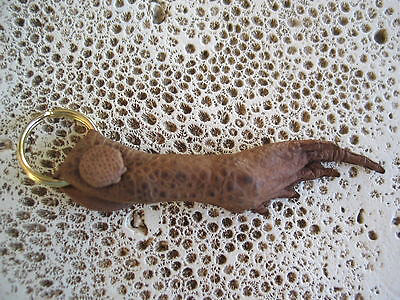 Interesting info on toads - thanks... thought you might be interested in this snippet... apparently during the 1918 "Spanish Flu" pandemic a household servant who was a "Welsh Gypsy" in the home of Robert Graves (the poet) wore a bag round her neck which contained leg of lizard. (I presume it was dried...) and she was the ONLY member of the household who did not catch the flu. I think it more possible that it was actually a dried leg of toad...