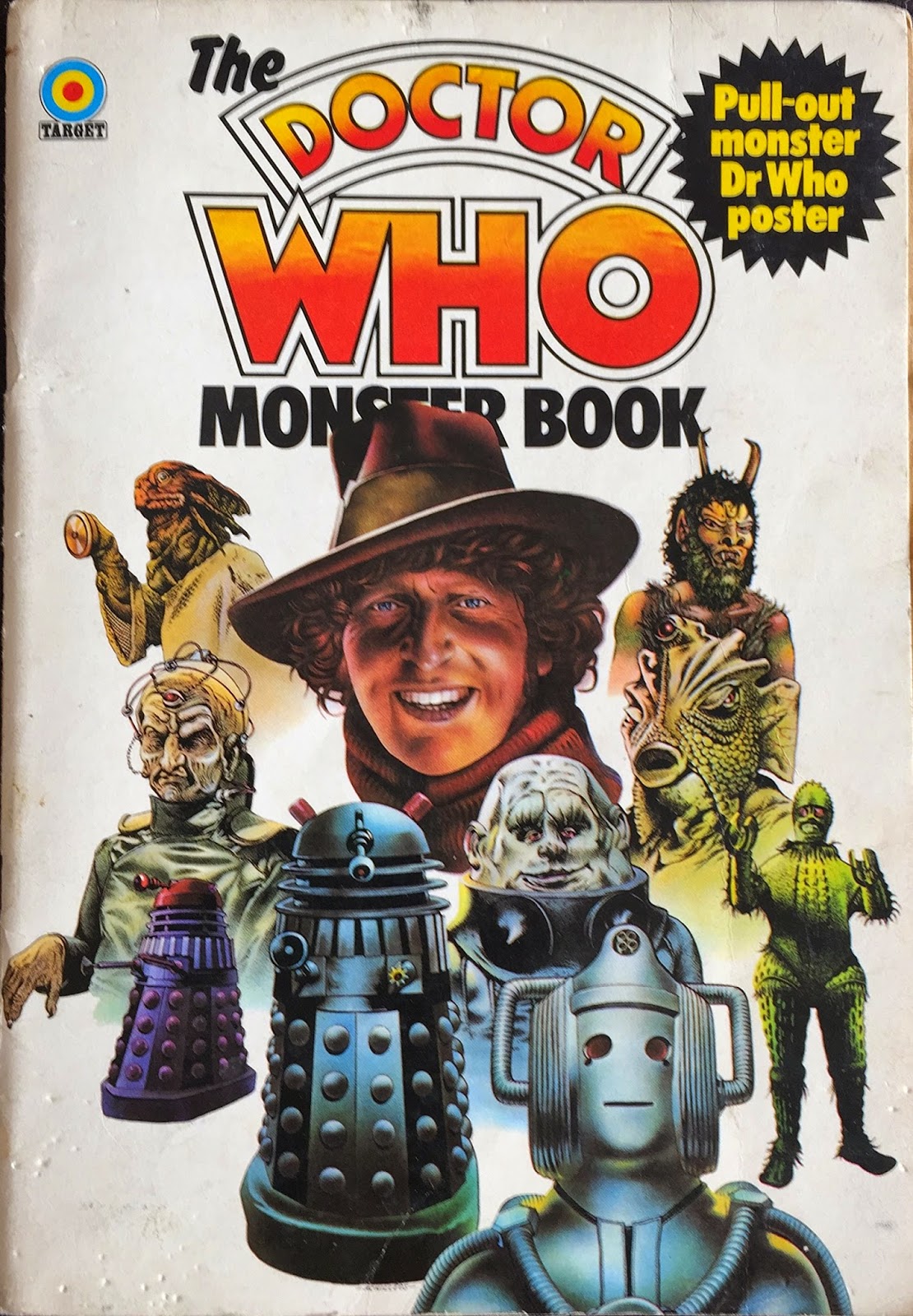 Alright, alright, I admit that strictly speaking this isn't a tome of weird fiction! However back in 1975 when this was released, Doctor Who was the scariest show on TV. Now obviously that had a certain amount to do with me being only 6 at the time, but at the same time it was during the mid '70s that this long running SF show was at its most frightening. Jon Pertwee's Third Doctor had fought all manner of monstrous foes, including killer shop dummies, giant telepathic spiders and an alien Devil, but it was at the beginning of Tom Baker's reign as the Fourth Doctor that the show moved further into horror territory. Along with the new Doctor came a new producer, Philip Hinchcliffe, and a new script editor, Robert Holmes, who would for the next three seasons steered the show into stories that were a sublime blend of SF and gothic horror.

In this era, the Doctor would not only face some of his most iconic enemies such as the Davros, Weng Chiang, and the Zygons, but also encounter Egyptian mummies (Pyramids of Mars), Quatermass style killer plants from space (Seeds of Doom), anti-matter werewolvery (Planet of Evil), and deep sea Frankenstein experiment (Brain of Morbius). And all this in addition to battles with established monsters such as the Daleks, the Cybermen and the Sontarans.

Hence with the show mining this rich, deep vein of outer space terror, the time was ripe for a special volume celebrating all the marvelous monsters and villains of Doctor Who. Now publisher Target already had launched their now legendary range of paperback novelizations of classic Who stories, and were keen to expand. However The Doctor Who Monster Book was no paperback, instead it was a large format book, featuring 64 glorious pages packed full of information and pictures. The concise but detailed text was by veteran writer Terrance Dicks, who had not only written scripts for Doctor Who, but served as script editor, and authored many of the Target novels, so we were in safe hands here! The full rogues gallery featured was -
And if all that wasn't exciting enough, the first edition came with a gorgeous poster reproducing the lovely Chris Achilleos cover.

The selection of baddies included in this tome mostly comprises of the then recent additions to the canon, featuring monsters from much of the Pertwee era and the first couple of Baker seasons. However coming out during a golden age of the show has meant that now its contents do read like best of classic Who monsters. Looking at it today as a long time fan of the show, it's only the inclusion of the Exxilons, Bellal and the Mining Robot that really jump out as being vogueish inclusions from the time of publication, monsters would be replaced by the likes of the Mara or Sil if this book was covering the entire run of the classic series.

And there is another change Time has wrought - these days the internet is awash with this kind of material; there are whole sites that detail the history and lore of popular fiction universes. However back in 1975, while it was aimed at the children's market, this volume was one of the only reference books available on Doctor Who.  Yes, there were regular Doctor Who Annuals every Christmas (see here for more information on the humble annual) - but these rarely included much about the show's past or history. And so, in the mid '70s the only reference books available were this volume, The Making of Doctor Who (also from Target) and the Radio Times 10th Anniversary Special if you were lucky enough to pick up a copy in 1973. The Doctor Who Monster Book was therefore not just the only encyclopedia style reference work on Doctor Who available at the time, but also the first of its kind.

Furthermore this was well before the dawn of the home video age, which meant you could only revisit the old stories through the Target novelizations, and this book was the only way to see actually see the old monsters. Hence for a fan of the show, this book was as valuable as if it were printed on gold! And I can't describe how utterly thrilling it was to look at the photos in this volume, a glimpse into stories now vanished into the ether. Back then we never dreamed that you would be able see, let alone own, copies of these classic serials, and hence The Doctor Who Monster Book was like a rare tome of elder lore, a bestiary of lost creatures and monsters from the inaccessible past! Needless to say my copy was literally read until it fell to bits! 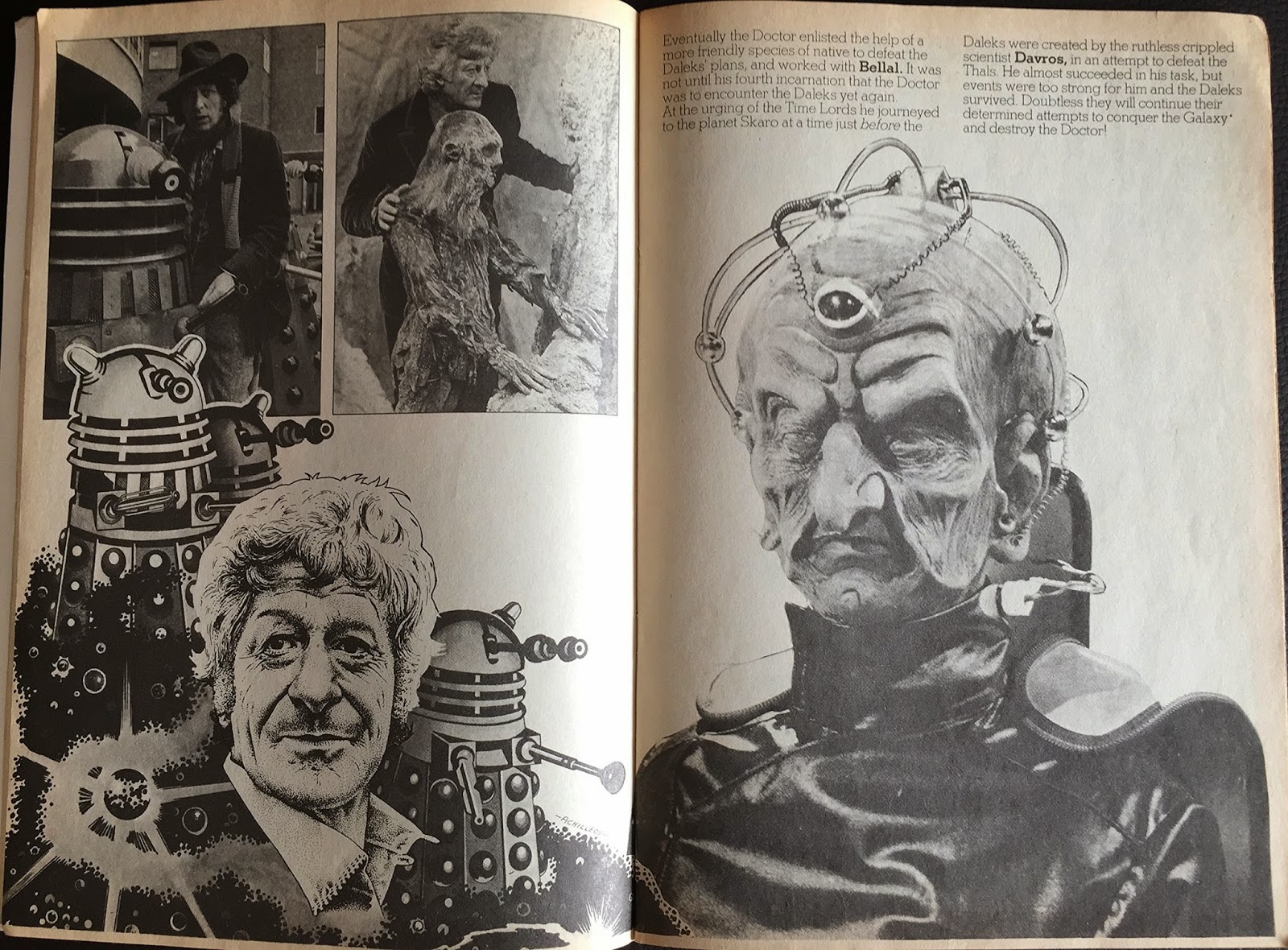