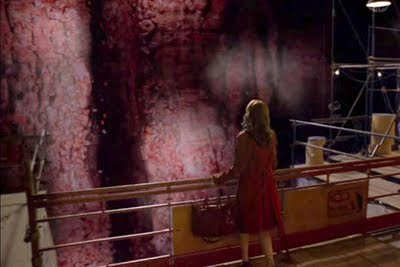 That's right folks, I'm dispensing with the usual spoiler status notifications as it's now very apparent that the show has already been well and truly spoiled... by the appalling plotting! Ba-dum-tish! Thank you, thank you, I'm here all week... But you can take it as a warning of torrents of  bad language to follow!

Well then the penultimate episode eh! Bet you're expecting loads and loads of really exciting stuff, with the script pulling out all the stops and the production crew spending the budget like a yuppie on a coke and hookers bender! And what does this episode actually deliver? A lot of squabbling in a Welsh terrace house! Brilliant eh! Bet you didn't see that curveball coming did you!

But wait, it gets better! Besides hammering down the brakes on the pace, we also jump forward in time two months! And why? Search me! Perhaps to let Jack heal from being shot? Or possibly so the date of the finale in the story matches on of the production crew's wedding anniversary? Or perhaps it's part of the number 2 motif Miracle Day seems to be developing - you know, how plot threads and story elements are shown then forgotten about and not mentioned for a a couple of weeks.

But aside from arguing over take-aways, the viewers at home are treated to a veritable feast of witless events. Now, yes it's a sci-fi show and a certain amount of suspension of disbelief is necessary but The Gathering insists on gut-punching you with idiocy after idiocy.

Highlights of imbecility include the following...

1) Gwen is using a common or garden search engine - a thinly disguised Google - to research the ultra secret 'the Blessing'. Because shadowy evil masterminds always post up details of what they are doing online don't they...
2) And apparently it's taken her two months to get through the first page of results....
3) Despite evading capture by the CIA and the Families, merrily hopping to and fro across the Atlantic, she can't hide her dead-ish dad from the local Gestapo.
4) Oswald Danes also apparently can globetrot with ease despite being the most high profile child murderer on the planet.
5) Data specialist Esther apparently is foxed by the simple task of translating foreign languages... If only there was some vast electronic network where you could contact a student of Mandarin or perhaps even an automatic translation service...

So far this incarnation of Torchwood have been fairly slow off the mark in tackling this Miracle malarkey, but the way they are carrying on in this episode is criminally stupid. And I'm now fairly convinced that with just the basic academic research skills I use in writing reviews and articles, I could have made more headway in getting to the bottom of the mystery than they have in nine episodes.

However, all this moronic scripting does actually have a purpose - I'm guessing it's to soften us up for the crowning cretinous big reveal of what the Blessing is...

I heavily suspect that what he's doing is shouting  'hey you gay agenda haters, choke on my massive gash!' And if you don't believe me, after you've gotten over the shock of the Blessing, listen again to the introductory dialogue, sorry exposition as we don't do dialogue anymore in Torchwood...  We are clearly told that the sight of the blessing has a worse effect on men and women seem to be able to handle it better. Yes folks, Freudians across the land will be having heart attacks and the rest of us not versed in psycho-sexual symbolism will be wondering whether this is Davies calling us a bunch of c***s.

And if a giant vaginal crack was quite insulting stupid enough for you, it apparently stretches right through the globe from Shanghai to Buenos Aires. Yes, it's fuck you geology, fuck you sense and reason, and fuck you audience! Lord alone knows what he's cooked up for next week...

But considering how Jack's blood is magically drawn towards the Blessing, I now rather suspect that the grand finale will be Jack shagging the titanic cleft to death accompanied by a large popping noise as RTD finally disappears up his own backside.

Honestly the only good thing about this episode is that it provides a devastating riposte to anyone bleating on about how Steven Mofaft has ruined Doctor Who. Just look at the awful dialogue, the idiotic plotting and that, that... Blessing and dare to tell me that you wish RTD was still in charge of the TARDIS. Unless of course you think we're sadly now missing out on adventures like Doctor Who & the Labia of Doom...

Still on the bright side, just one more to go....


Reviews of previous episodes can be found here

Email ThisBlogThis!Share to TwitterShare to FacebookShare to Pinterest
Labels: idiocy, is it over yet, load of old bollocks, miracle day, review, science fiction, television, the gathering, torchwood

Ah good so I'm not the only person who thinks this is utter crap.

It makes those episodes of the X-Files where there was nobody but Terminator 2 and some woman running around in the dark look good.

I predict the final episode will be a blur of jump cuts and rapid shouting, followed by Jack falling into the giant "hole", everyone becoming normal again and none of the plot explained.

I mean they've explained the miracle as being some field thing, with a bit of a side plot of some families but the nerd in the chinese restaurant explained that away with a few lines of script.

It was crap from the start though, I guess it turns out you can't take a UK *humerous* scifi show, kill most of the cast, replace them with Americans who think this is a series of 24 and make it any good.

They could have at least gone with "crap but coherent"

Well said sir! Your final line nails my biggest gripe with this show - the appalling plotting and subsequent lack of sense. :)